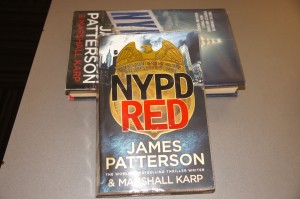 The group have been reading ‘NYPD Red’ by James Patterson and Marshall Karp which they met to discuss on Monday of this week. NYPD red is book 1 in a new series with NYPD Red 2 coming out this month.

Five members of the club were able to attend, with verbal reports filed by two people who were unable to come.

Generally the group found the book an easy, quick, not too challenging read.

Grace felt the plot was good but was of the opinion this could have been developed more instead of there being so much emphasis on the relationships of the two police officers investigating the case.

Janet thought the short chapters helped the novel to move along at an exciting pace and Doreen agreed, telling us that this was written in the typical style of a James Patterson novel.  Doreen is the only member of the group familiar with his work and as such said she would definitely read NYPD Red 2 when it came out.

None of the rest of us were too keen on continuing with the series and personally speaking I didn’t like the male and female police partner main characters-they seemed a bit smug and smart while other police characters were portrayed as incompetent- and their chat and one liners to each other were quite toe-curlingly unrealistic I felt.

The book for this month is ‘A Decent Interval’ by Simon Brett which is a contemporary theatrical murder mystery with amateur sleuth Charles Paris on the case. This is part of a series although there has been quite a gap since the last title – however, I’ve read that Simon Brett plans to write several more Charles Paris books now the character is back.

We will meet next in the library on Monday 2 June 2014 at 6.30pm and this will be our last meeting before having a break in July and August before re-convening in September.