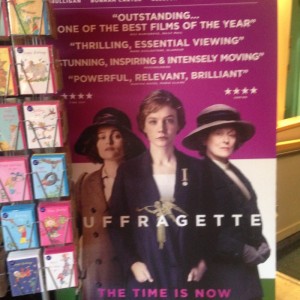 I am in no way any kind of film reviewer, but after seeing this film today at the Edinburgh Filmhouse I was completely overwhelmed by this film. Especially I think in the smaller sized film theatres of the Filmhouse you feel more interaction with the film.

This film portrayed the struggle of women in the Suffragette movement in the pre First World War era of Great Britain. This movement led by Emily Pankhurst had peacefully campaigned for years for the right for women to vote and had had been totally ignored. So they then started to make a stronger statement by means of civil disobedience and protest, lead by Emily Pankhurst.

The film takes you through the struggles the pain and abuse these women went through in this struggle to get the vote, I also went through a swathe of emotions watching this film, tears, anger, happiness and sorrow

I won’t go in to any more details on this but if you get the chance please grab it and go and see this film you won’t regret it.

If you have recently seen a film, play, TV show or read an interesting book and are interested in writing a review, we want you!