This can’t be said enough, if your puppy doesn’t learn how to get on with humans, dogs and other animals then they will have an anxious and nervous life including whenever they meet someone.

Show puppy how to behave around everyone

Socialising your puppy starts in the home with everyone puppy is living with and all the visitors that come a knocking …chew the doorbell… and the bottom line is puppy wants to be included in everything you do as part of the family. About six weeks ago my human had his grand puppy humans staying over and in the morning I wanted to say good morning to them and he insisted I went to the toilet first. I didn’t understand and I thought he was saying I was to stay away from the human puppies and all morning I sulked in my bed, watching them run around having fun. It was an afterthought on my humans behalf but it made him realise I didn’t understand he was saying ‘go to the toilet then we’ll say good morning to the puppies’ So us puppies are hard wired to be involved in the family, all you humans have got to do is show us what to do. We got over it and here we are playing in the park.

So get out and about with puppy 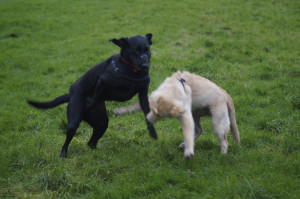 Puppies love to play together

Getting out and about with puppy is the best way to meet other dogs and humans. Most humans are happy to socialise and will welcome your puppy to say hello and there is nothing more that dogs want to do …chew the string… When puppy goes out in the morning to the toilet they sniff around to see how many dogs there are and find out what’s happening. It’s like reading the morning papers and just like a human, we’ll read them while on the toilet and catch up on all the latest happenings. Be patient and let puppy enjoy the morning papers.

Once toileted and ready for a walk your puppy is hoping to meet any of the dogs that are in the “morning papers” and like any infant, they need to be shown how to behave. They don’t understand words despite the fact their eyes say different …chew the Jedi puppy eyes…

So get out there and start meeting other dogs and humans with your puppy.

Think ahead for your puppy 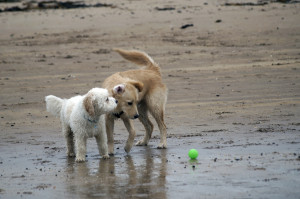 Being taller than your puppy you should be able to spot other dogs in the distance and whether or not your paths are going to cross. When they will, walk towards the other dog and the moment your puppy spots the other dog, get puppy to sit down to sniff and watch. It’s important to get puppy sniffing to start making sense of the dog before going up to say hello. A dogs nose uses sixty percent of the brain and is the major source of information so teaching puppy to stop and sniff is the best way to teach them social cues.

Dogs see in black and white and smell in colour 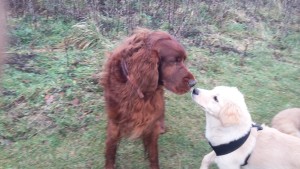 Once puppy has taken a moment you can let them approach the other dog. Now, some dogs are nervous and aggressive and if you meet a dog like that you don’t want to shy away but you do need to be aware to protect puppy. Is the other dog on the lead? Is the human taking steps to control the dog? My experience of meeting aggressive dogs is that the humans tend to be embarrassed and will try to avoid the dogs meeting. That’s fine for your puppy but a real shame for the other dog who doesn’t know how to be social and reacts with nervousness and aggression. But it’s important to let puppy watch and sniff the nervous and angry dogs because they will remember those colours the next time they see an angry dog.

There are lot’s of friends out there 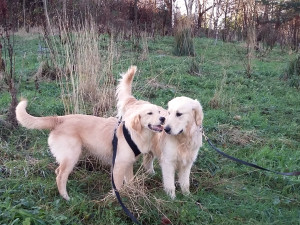 So remember that most dogs are happy to meet puppy and will want to play and have fun so do not be worried about the few aggressive dogs and let your puppy work it out and learn who to play with and who to avoid. Enjoy the walk and say hello to the humans and let the dogs sniff each other from a distance and if everything seems safe, let puppy say hello to the dogs and puppies you meet. And who know’s even you humans can say hello too.

You might like to see some of the friends I’ve met Click Here to see my friends and here’s a video of me playing while the humans chew the string.