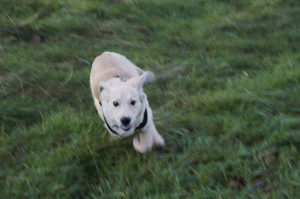 Exercise is the secret to a well behaved dog

Exercise is the real secret to a well behaved puppy or dog …chew the exercise… and one of the simplest for you humans is the good old game of fetch. We do all the running, get exercised, have fun and go home happy and content. It’s not to replace a walk because a walk will do you humans a load of good too.

Since living with me, my human has lost loads of weight and has stopped panting at the top of the stairs. Everyone can benefit from exercise …chew the exercise again… 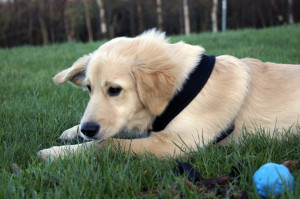 So the first step to teaching us puppies fetch is teaching us to let go. It’s easy to get puppy to run and get something thrown in their sight but what you want is puppy to give you the ball back for the fetch to happen again.

Start at home with a toy that your puppy likes and all you need to do is be patient till puppy volunteers to let go while you hold it still and then show praise give the toy straight back. After a while you can throw the toy but in the beginning give it straight back immediately. The last thing you want puppy to think is they won’t get it back. And by getting it back and letting go is a game of fetch and in this little exercise you teach puppy the concept of fetch.

See the learning in action as I get older

This video is the day when I learned the concept of fetch. You will notice that in the beginning I’m reluctant to let go of my teddy but by the end I’m throwing it at my human because every time I let go he praised me.

The only thing left to add is distance, which you build up indoors and then start outdoors with short distances and build it up over time.

Here’s me at eleven weeks old  loving fetch and more importantly, dropping the ball when I get back. That was because I learned to let go first ;-)