Here is a review of the new film The Legend Of Tarzan submitted by one of our community reporters. To read more of our reviews by local people click here.

THE LEGEND OF TARZAN 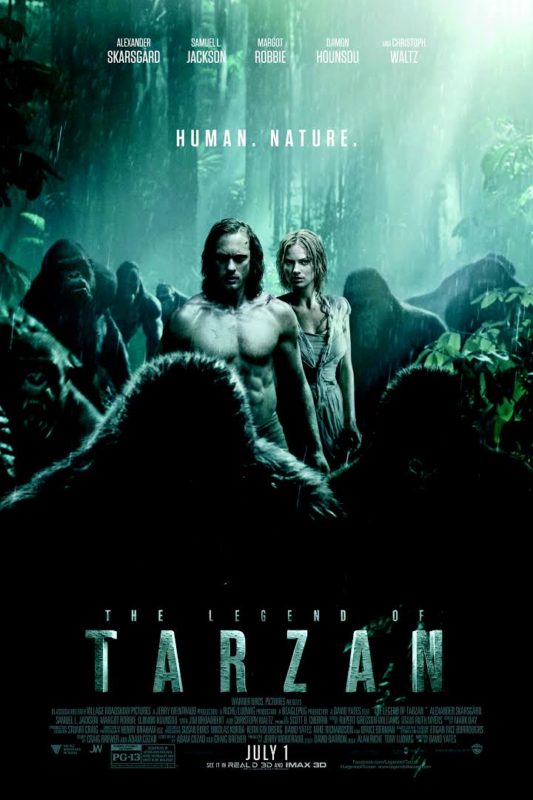 This movie cheered me up after recent weeks of cold temperatures and cloudy  skies with intermittent torrential rain!  It’s rated 12A and would make a great family cinema outing. If you can’t catch it (it is impressive on the big screen) then it will be a good DVD choice to watch at Christmas.  Since the 1930’s there have been around 40 Tarzan movies  – most of them made in that decade.  They tailed off in the 1950’s and there was a long gap until ‘GREYSTOKE’ in 1990. This was a big budget blockbuster  which retold the tale to a new generation who had only a dim memory of the orphaned English aristocrat infant, shipwrecked en route to India with his parents – the only survivors. Tarzan’s parents built a treehouse but both succumbed to fever and the baby was discovered by local Apes who adopted him. GREYSTOKE was a big hit starring Christopher Lambert and a posse of top British actors including Edinburgh’s son Ian Charleson (who I went to school with).

In the 1930’s the head of MGM Sam Goldwyn stated in a blatant publicity-seeking soundbite: “Professor Sigmund Freud is the greatest living authority on LOVE and I will offer him $20,000 to come to Hollywood to give us his advice on several movies now in production.” (Freud disdained even to reply). However the Theseus of the human mind would probably have been entertained by the Tarzan movies and seen  dramatic enactment of a lot of his theories about Libido,  healthy  lust, and repression resulting in volcanic eruption of rampant emotion, not to mention Man’s simian ancestry and instincts.  It is fair to say that TARZAN became a sort of folk memory passed down to generations who never saw the black and white Johnny Weissmuller films. Even today most people vaguely know the story and many believe it is based on real events, so Tarzan  is a kind of modern Myth.

Half a century ago every small town in Scotland had a Cinema (there was no T.V.) and Edinburgh itself had around a dozen. Cowboy and war movies were  masculinity-transfusions for men and boys but did not appeal to the female audience who preferred ‘three – hanky tearjerkers’ – torrid romantic melodramas such as  ‘GONE WITH THE WIND’ and ‘REBECCA’ which often featured feisty confident female characters played by the likes of Bette Davis or Katherine Hepburn. So, there could be problems choosing a movie that was going to be enjoyed by both husband and wife or courting couples. The Tarzan movies (as well as the illustrious KING KONG) offered something to both genders – athletic young men with bare sweating torsos defending helpless maidens whose clothes had been ripped off along the way by briar bushes until just their tattered silk petticoats survived (all this was was done with tasteful restraint compared with today’s movies).  Sigmund Freud would have approved!

The movie opens with a sober intro placing the story in its history context. In 1884 leading European States met to plan the final carve-up of the African continent into colonies. The Treaty of Berlin awarded the lion’s share to Britain and France with smaller slices of the cake served to Portugal, Spain and Belgium (Holland which had established a flourishing colony in South Africa by the 18th century was side-lined because Britain planned to annex Natal and Cape Colony).

I went to see ‘The LEGEND of TARZAN’ with caution and low expectations, anticipating an excess of CGI (Computer Generated Imagery) and mind-blowing special effects (GREYSTOKE’s Apes were  actors in quite convincing furry costumes). The CGI Gorillas are actually believable and cute but move in an odd slow-motion way. LEGEND is the sequel to GREYSTOKE and sees Tarzan a.k.a Lord Greystoke living an aristocrat’s life on his country estate with Jane, now Lady G. The British Government asks him to go to the Belgian Congo to give advice to Captain Rom (Cristolph Walz) a maverick diamond merchant about a hostile tribe who live on a mountain rich in Diamonds. Walz gives a great performance as the Baddy, wearing a white calico suit that remains starched and spotless despite his many come-uppances by Tarzan (he even makes romantic advances to Jane when he kidnaps her, which are responded to by having a large vase smashed on his head.)  Walz gives a low-key sneering performance which is perfect. Tarzan – ALEXANDER SKARSGARD  performs his tasks manfully  adeptly swinging through the forest on convenient hanging creepers supported by his brigade of Gorillas, who adopted him as a baby.

I don’t think the script for this movie will win any awards, having been written on one side of an A4 sheet.

For more information you can contact us on digitalsentinel@whalearts.co.uk or 0131 458 3267.