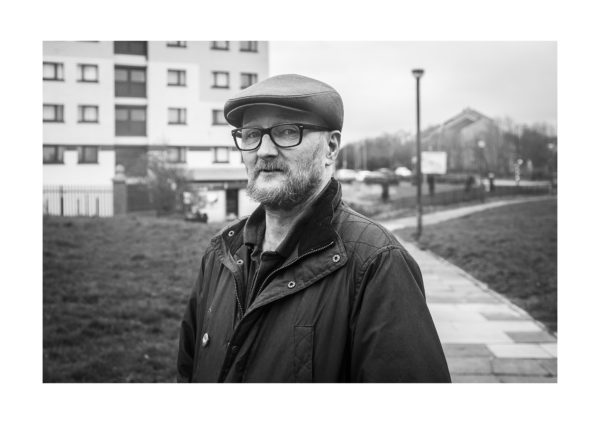 Below are the photographs and interview with Derek Clancy who speaks about his time living in Clovenstone, his interest in painting and returning to the area where he grew up.

You can listen to the interview with Derek here:

If you are unable to listen to the interview here is a transcript of what was said, the writing in italics is Helen, Derek’s sister: 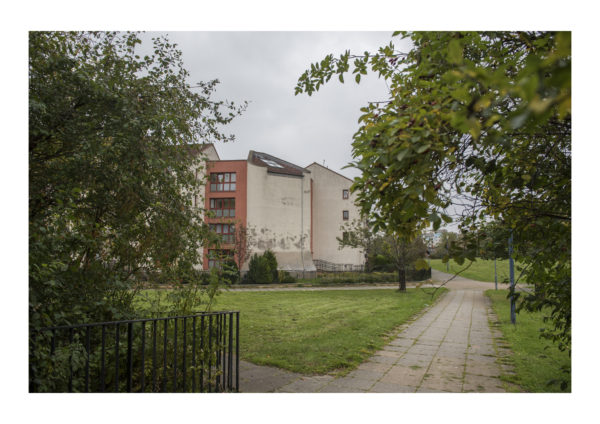 My name’s Derek Clancy. I live at Clovenstone Park. I moved there about 16 years ago. Initially I moved to Clovenstone when they first built it. I moved out as I grew up and I moved back after a car crash.

Familiarity. It is, you know I was primary school age when I moved there. It was a brand new house. We just hadn’t seen anything like it. We came from Pilton. You can imagine the change if you knew Pilton back then. It was quite massive for us and we were happy there. So I got quite familiar with the place, as a kid it was good.

Are you involved with any groups or clubs in the area?

Nah. There’s the catch. I did have a car crash and I was pretty lucky apparently to survive. I had lost my memory, I had head injuries and somewhere in the hospital I had already been for an interview with the housing association at Prospect before the car crash, but Prospect turned up at the hospital and gave me the keys to a house! So I moved to the house, from the hospital straight into a hospital in Clovenstone Park again. Facing the house I was brought up in as a child and it was just coincidence that happened.

I’m an artist to trade.

How did you get into that?

Clovenstone again. It was an escape for me eh. Our upbringing was kinda hard and for me it was an escape to just go and draw. I was skipping school one day and I went to the National Gallery for the first time, and I just went I can do better than them and that was it. I was bitten and I’ve painted ever since.

One of my claims to fame is that I have actually painted the National Gallery from life and I’ve put myself in the painting. The hard thing was, I wasnae allowed to change anything in the Gallery so I had to copy and well copying all them made me quite a good painter.

Art is just escapism and I do a bit of photography as well. Photography was just a tool for me as a painter “Oh I need a reference for something” or “I’ve got tae remember this.” am no a photographer. I’m a painter.

The car crash kind of led to severe depression and things like that. I haven’t painted since the car crash. I’ve dabbled but I’ve never finished any work since 15 year. I’ve taken images of Clovenstone and thought “yeah that would dae if it was a painting” Ive just never done it. I still buy the materials. I’ve got loads of blank canvasses and oils, paints and brushes. I’ve just never used them.

I’ve always been shocked he’s no done the Pentlands because of the children.

We used to take them up there.

That’s where we used to go Spylaw and the Pentlands.

As kids we actually went there. Quite a lot. Sunday the whole gang away up the Pentland hills.

We used to go to the Community Centre as children. They were still building it when we got there.

There was a sense of community back in the seventies.

We all knew each other. We all spoke

Before the bridge was there and you had to cross the road, over that road was the big gap.

You still hear that. We’re no from Wester Hailes we’re from Clovenstone-

Somebody says that “where do you live, oh Clovenstone, Wester Hailes?” “No. Clovenstone!”

When you talk to them at the school and that. They still feel it, those that have been there for years. Clovenstone is its own community.

There is a sense of community, people do look out for each other, you know what I mean. If they realise there’s a problem.

Aye they will help-