SCOREscotland will be heading along along to the Methodist Church, 25 Nicholson Square, Edinburgh, EH8 9BX this Saturday 28 January 2017 to take part in Edinburgh’s Shared Vision Your Decision Event.

“Shared Vision – Your Decision is an Edinburgh based project, which enables Members of the public aged 8 and above, who live, work, study and volunteer within Edinburgh, to decide how public money is spent in eradicating Islamophobia and associated prejudice behaviour. We understand that Islamophobic behaviour also affects other faith communities.”

Police Scotland, the City of Edinburgh Council and the Scottish Government have contributed £40,000 for allocation through a Participatory Budgeting process.

Organisations across Edinburgh have submitted their ideas how they feel they can combat Islamophobia, and this is your chance to decide which projects you feel will be most effective and should be funded. Police Scotland are asking the public to take part in a public vote to decide which project will receive up to £5,000 funding.

If you are in the area then be sure to come along to the Methodist Church and support SCOREscotland, when the voting launches. You can also vote online here and in local libraries across the city.

Voting is open until 13th February. 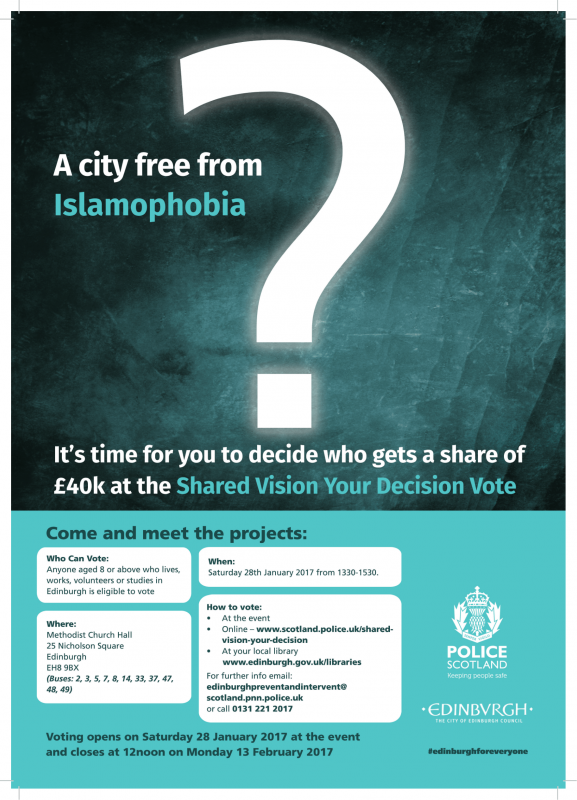