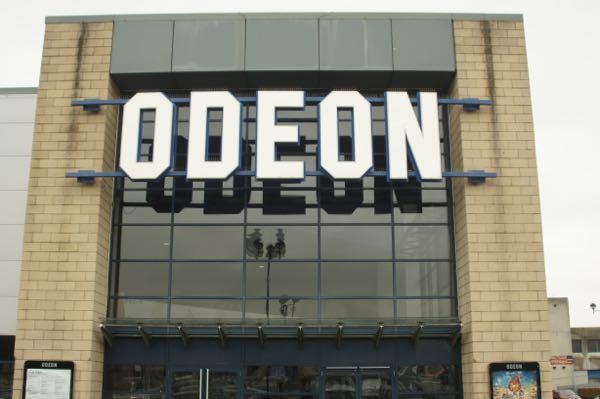 Here is the concluding part of his Haunted Screen series.

How does the ODEON at the Wester Hailes Plaza today compare with Edinburgh’s long lost cinemas of yesteryear?

One encounters an anonymous tin warehouse which could be a B&Q Store until we see the giant ODEON logo and the mundane Job Centre style entrance. A few cinema posters help us to identify this place as a cinema.  Disappointment gives way to childlike joy on entering the foyer which has a popcorn volcano, sweet dispensary, coffee fountain as well as plentiful supplies of soft drinks not to mention free posters and cards of your favourite Superheroes! The staff are helpful – even offering to show you the way to your assigned mini-theatre (of which there are 7). The lobby is furnished with comfortable sofas in case you are early or need a sanity break from the ‘SMURFS’ movie. The cinemas are clean, warm, draughtproof and rainproof unlike some mentioned in the first article and the seats are comfier than my armchair at home. I should have my tongue cut out for saying this but the ODEON/Plaza is a big improvement on the old days.

In the early 1960’s Edinburgh was a different city in many ways. It was still “Auld REEKIE” as many households used coal for heating and the smoke pollution caused smog in winter months as well as turning buildings black with soot. It also caused coughs and sore eyes. The Coal Merchant’s wagon would wend its way street by street stopping at regular customers who might vary their order depending on how cold it was. The coalman carried a hundredweight sack round the back of our house in Drylaw dumping it with a great crash in the coal box made by my Dad. These “Corporation” homes built in the 1950s had a concrete-lined coal store in the utility room – ours became a gloryhole full of garden tools and paint tins then later car parts.  Once I found a fossil in the fireplace embers and took it to the Museum – it was part of a giant Tree Fern 80 million years old.  If you were hard up you could buy “briquettes” – small bricks of compressed coal dust which were inexpensive but gave little heat just a lot of smoke.  Edinburgh’s citizens often seemed like grey ghosts in the November fog of their sooty black city – men wore long brown coats and bunnets or brimmed Trilbys and bowler hats could still be seen in George Street.  The only splash of colour would be a woman’s headscarf – the motor cars were all black or brown too.

This is why Cinemas held a great attraction for young and old. Like Public Houses of a past era they were “Palaces” for the less well off, in fact an early term for a cinema was a “Picture Palace”.  A visit to the PLAYHOUSE would have been like spending a few hours on the ‘Queen Mary’ ocean liner and an escape from the dreich city outside. For the “Swinging Sixties” did not reach Edinburgh until late in the decade when mini-skirts finally appeared along with the ‘007’ movies and a few fashion shops for the young who up ’til then had dressed much like their parents.  I was then just a frozen pea rattling around at the bottom of this barrel who knew nothing except that I liked to go to the ‘Pictures’ with my pals on Saturday afternoons.

We went a few times to the SALON in Greenside Place which had a mock Chinese pavilion entrance painted a sickly green – an eyesore by any standards. It’s fair to say the Salon was the ultimate “flea-pit” (most of the city’s cinemas were fairly clean). The Salon’s admission prices were low and it screened old westerns and horror movies. It takes a lot to turn the stomach of a street urchin but the Salon made me boak. At least the EASTWAY employed a cleaner – it was located at the top of Easter Road and the site is now an Iceland store (You can see the original building from the rear).  This was a small local cinema which gave hospitality to those seeking warmth, the lonely elderly and housewives enjoying a free afternoon. So the Eastway was a shelter from the storm as well as a dream factory. Popular films of the time we saw there included ‘ALEXANDER THE GREAT’ starring Richard Burton and ‘MOBY DICK’ with Gregory Peck.

The STATE cinema opposite Leith Hospital is a good place to end this trip down Memory Lane for today it still rears its head like an unsinkable white Art Deco ‘Moby Dick’ from a forgotten age.  This is because a local group have campaigned for years to save the building. Many years ago I went there with my Dad to see ‘Lawrence of Arabia’. We queued outside in the golden evening sunshine – then the Manager came out and greeted us all, assuring us this was a great movie which we would enjoy! A few weeks later I saw in the newspaper that the STATE was soon to close for good.