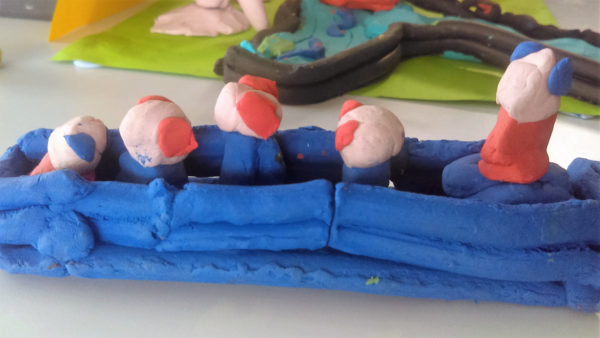 Pupils from class P4C at Canal View Primary School have been hard at working creating three great animations as part of the Union Canal Unlocked project.

The pupils have had fun working with students from Edinburgh College of Art Animation Department and Anna Canning from UCU in creating their own unique tales from the towpath.

Union Canal Unlocked is a partnership between Re-Union Canal Boats, Scottish Canals and Scottish Waterways Trust. The project has created an app which contains a collection of the Union Canal’s heritage and stories. They hope to encourage local people and visitors alike to explore and get to know the canal’s history and points of interest.

The project was only possible thanks to the generous funding from the Heritage Lottery Fund, Edinburgh City Council, West Lothian Council, Falkirk Council and Sustrans.

The three animations are:

One day long ago, when the Union Canal was being built, a passing swan saw the navvies hard at work and was happy, thinking “that’s going to be another lovely place to swim”. Then after the canal was completed, it got really busy with boats going up and down carrying coal and manure, and there was lots of noise. So the swan was sad. Finally a rule was made that people had to go slowly on the canal – no more than 4 miles an hour – and everyone started to help look after canal and its wildlife. The swan came back to the canal, and enjoyed hearing happy children and dogs playing by the canal as it swam along.

Zoe is a horrible girl, always grumpy to everyone, and she thinks she can do whatever she likes. One day she’s heading down to the canal with her sister. As usual, she’s in a bad mood. “The canal is boring”, she whines. When she gets there, she whinges about everything, and says mean things about the animals and the fish. Suddenly she jumps onto a boat without asking permission or thinking about whether it’s safe. The fish in the canal and the horse pulling the boat have been watching and listening, and they decide to teach Zoe a lesson: they rock the boat, making silly Zoe fall in the water. Her kind and patient sister Sophie throws her a rescue ring and helps pull her out. After a spell in hospital, Zoe realises that she should respect the canal and its wildlife and other users, and always remember to be SAFE (Stay Away From the Edge).

A group of friends are enjoying a boat trip from Edinburgh to the Falkirk Wheel. Just when they are nearly there, they take a wrong turning and end up in the woods! But how is this possible on the canal, because it is a straight line and you can’t really get lost? Well, just before you get to Falkirk Wheel, there is a side basin that used to be Port Maxwell, the terminus for the flight of locks that connected the Union Canal to the Forth & Clyde Canal. Now it’s not used, because the Falkirk Wheel does that job. Luckily for the boat party in our story, a friendly heron living nearby came and told them to turn the boat around and pointed them in the right direction again.

The Animations were created with help from:

You can watch the animations on the Union Canal Unlocked website here.