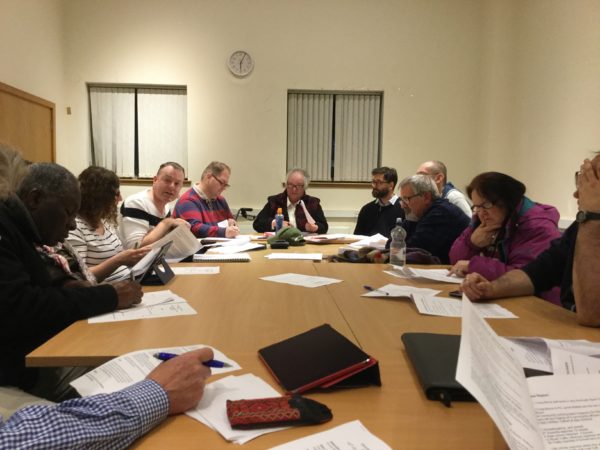 The Wester Hailes Community Council held their November meeting yesterday, Wednesday 1 November 2017. Here is a report of what was discussed.

The meeting began by co-opting two new members to the Community Council, Beren and Jason Mcloughlin. Community Council Chair also announced that the groups Secretary David Corcoran was resigning from the role with Beren being chosen by the group to take over.

The next item on the agenda was a report of crime in the area by Police Scotland. PC Ewan Chancellor introduced himself as one of Wester Hailes community officers after a boundary change which has brought Wester Hailes into the Pentland Hills. Crimes in the area over the last month included:

PC Chancellor was then asked about the possibility of the return of football matches between the Police and local young people. PC Chancellor said it was always something they were interested in doing, they had recently had a match with a group of youths in Saughton.

The Community Council then discussed if anyone would fill the role of treasurer after previous treasurer Rik Morley announced he would like to step down. Community Council member Chuks Ododo agreed to work with Rik over the  next few months with the hope of taking over the role after a transitional period.

The Community Council then welcomed a report from Les Mason from the Scottish Fire and Rescue Service. Les began by thanking the community after the recent house fire in Walkers. He then discussed the SFRS preparations for Guy Fawkes night. Fire crews have been visiting area identifying possible bonfires and removing those they deemed unsafe. Les urged the local community to contact the SFRS if they identify any sites by calling 0131 608 1100. Les also reported that there may be an increased presence in Clovenstone after two bonfires already where Fire crews received verbal threats from youths.

Les also let the Community Council know about the SFRS’s ongoing Highrise fire safety campaign with SFRS employees looking to revisit highrise properties to disucess fire safety and also the possibility of having community events in the Calders Community Flat and possibly around Westside Plaza.

The Community Council then opened to issues from the floor. Rik stated that he had heard concerns from Calders residents after the Bridge 8 Hub has been moving containers again. He outlined that this has been an ongoing concern for the local community as well as the Willow Garden after Bridge 8 blocked access to the garden for a number of months with a container. Local Councillor Neil Gardiner agreed that he would look into the planning permission and if necessary discuss the site with the Council’s Planning enforcement team.

The Community Council were also please to discuss the increase in attendance at the meeting as well as the co-opting of two new members. This was viewed as a positive development and as long as attendance remains higher the group was not at risk of disbanding.

The next meeting of the Community Council will take place on Wednesday 6 December 2017, 6.00pm at Wester Hailes library.