The Digital Sentinel has joined with Maggi Scott from the Health Agency to carry out a series of interviews with retired teacher Maureen McMahon who has kindly agreed to share her memories of growing up and living on Calder Road over the last 80 years.

In the first interview, she discusses her early childhood, memories of the farm across the road, the businesses in the area and growing up and training to be a teacher.

You can listen to the interview here:

If you are unable to listen to the interview here is a transcript of what was said. The text in bold is Maggi, the interviewer.

My name is Maureen Theresa McMahon.

Theresa your 80 aren’t you?

You were born in the Elsie Inglis hospital weren’t you?

Yes and I think that’s why my Mum was very orientated to Women being in positions of authority. She was all for that.

What was her name?

Annie Donnelly was her own name.

And she married your dad?

Bernard, who was a twin.

Were they both Edinburgh people?

Ratho, both from Ratho. 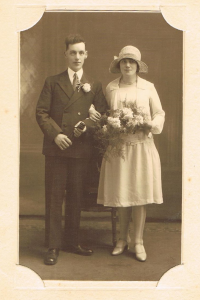 So they met and got married, and we have a photo of that lovely day and along came three children and they came straight to this house that we are in now?

What happened was my Father had a grocery business in Ratho, but he’d given so much things on tick, he was very soft-hearted, he had to give up the business, so they had to leave Ratho. They stayed with my Aunt until this house was ready for them.

And your Mum was unusual in that time in that she had quite a good job didn’t she? She was a Manageress.

Which was on Princes Street?

It was five restaurants she managed?

It was the restaurants she was in charge of not the bakery.

Did she work through having the children?

No as soon as she got married she had to give it up.

From the minute you’ve lived here. What’s your earliest memory of being in this house?

Sitting on my Dads knee at the fireside. We used to have two chairs there.

And we’re sitting in that room now aren’t we in 2018. What’s your earliest memory of being outside the house?

Going over to feed the horses in the farm.

Imagine you are looking outside your windows now and at the moment we look out onto the main road, the Calder Road. When you were a child what would you have seen?

We looked out onto the farm and the farmer was called Mr Towsey. There should be a photo from about 1945 or 1947 or something of him ploughing the fields with the, it was the last of the Clydesdale horses. And they did an article in the Evening News about it. I was so excited that there was somebody in the papers that I knew. There was a green gate with pillars. Two side doors and two side gates, one to Towseys house he opened the big gates if there was any traffic going in, and the other one was just the gate leading down to the avenue which went up to the Big House and to the farm.

Who lived in the Big House?

I don’t know. I think, it was like they were in another country. It was like To the Manor Born!

So were there fields just outside here?

Yes. There was the main road, what is the slip road now, and it was fields all the way right up to, well, it was Hermiston we used to walk to and going North took you down to Carrick Knowe.

Was there cattle in the field?

Yes. There must have been because it was a dairy farm. It was Shaw’s Farm.

Could you go in the fields?

We did but we got chased!

What was where Longstone Bus station is now? Was that fields as well?

Yes the only big thing was the prison. That was the only other big building.

What businesses were there around? There are little industrial estates now still. Like the Burton biscuit factory and things like that.

All I remember the only sort of buildings here were the Co-Op had all the shops. One shop was the butchers, the fishmongers, the fruit, then the big grocers, then the bakers and then the chemists. It was all the shops. The Silver Wing was there.

You said the Co-Op had all the shops. Do you mean all those individual shops were run by the Co-Op?

Were they all in the spot where the shops are now?

Yes. There was a post office there as well but that’s all gone. After those shops it was just fields.

It sounds like it was a nice place to be a child.

Oh it was fantastic. We loved it, oh we loved it.

Where did you go to school? 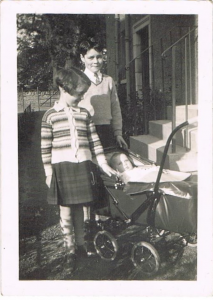 Was it a Catholic School?

Yes you see my brother and sister were already there. You know, they were travelling to school. My Dad wanted us all to have the same chance.

If you were a local but weren’t Catholic where would you go to school?

When I was 18 I wanted to be a teacher, but what happened was I didn’t get enough qualifications so I started working down in the Government buildings in Saughton. Then my Father took very seriously ill and I thought he was going to die, dramatic me. So I gave up my job and went to Skerry’s. I had the qualifications but you had to have them all on the one certificate.

It was a college for people who you know, wanted further education and were mature students.

So you finished your teaching qualification there did you. Where did you come to teach?

St Josephs which was the school opposite my house! The funny thing was I used to sit there and do my homework and I was looking out the window and my Mum used to say “you’ll end up working on Towsey’s Farm!”

Ah and you did but it was a school!

Yes once the farm was gone they built the school.

What year did you start teaching then?

So you were 27 when you started teaching. When did the school go?

It was after I left so that would be…

That’s right and the school was there for about another three years and then they built all those houses and flats.

Going back a bit. Mum stopped work when she started having children and your Dad what did he end up having as his job?

Working in the Rubber Mill.

Oh it was. He wasn’t used to manual labour like that. He was so determined to provide for his family. He was super, a super example I’m telling you. When my Mum died, he had never had to do washing or anything, hanging out clothes or anything. Everyone thought I would retire to look after him, but he was like “oh no she’s got her life to live.” He would say to me “what do you want me to do tonight” or “When will u put the potatoes on?” Because I came home everyday to have lunch. We had a meal in the middle of the day.

Did you live at home when you were teaching?

So you’ve live here all the time. All the way through. That’s quite an achievement because your 80 now. Not many people can say they’ve been in the same house their whole life.

Yes because you see I was looking after my Mum and Dad by that time. Within a month Joseph and Patsy had left home, they were wage earning.

When did you Mum die?

Did you have to look after her in her last years?

Well yes. My Dad was in the rubber mill and she was afraid to sleep on her own. Again it was my Dad who said, when I did qualify for Craiglockhart it was a residential. I said “Oh but Mum” and he said “No. You have to.” He was very unselfish.

So I was a resident at Craiglockhart. You had to write to get permission go home on the Friday and I used to always want to get home to do the shopping and all that.

So this was a college in Edinburgh that was a residential?

Yes, Craiglockhart. It gave us a good grounding. We used to think it was terrible that you couldn’t get home on a Saturday until they checked your room was clean. You all had to do either a whole stretch of corridor or cleaning out the class rooms. We all had to keep the college but that made you feel like it was yours, and yet when we were there we were thinking “we’re not slaves!” but it was all part of the training.