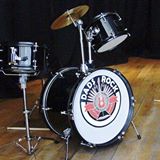 Dads Rock meet in WHALE Arts Centre as well as other locations around Edinburgh. But now they have set up in Fife too which has earned them the recognition of the Scottish Parliament.

A motion has been lodged at Holyrood to congratulate them on their achievements. And we at the Digital Sentinel say well done too!

It reads:-“S4M-09076 David Torrance: Dads Rock Arriving in Buckhaven—That the Parliament welcomes the creation and what it considers the instant success of the new Dads Rock group in Buckhaven; understands that Dads Rock was established in February 2012 by Thomas Lynch and David Marshall from Edinburgh in response to the limited amount of services available for fathers and their children; notes that dads and their children up to the age of five are encouraged to “rock out” with musical instruments as well as use the usual games, crafts and arts during the free weekly sessions; considers that Dads Rock groups also give fathers an often rare opportunity to discuss topics surrounding fatherhood; understands that the Dunfermline Dads Rock group was established in early 2013 following a successful pilot project in collaboration with Fife Gingerbread and that the new Buckhaven group is the second one jointly run in Fife, and commends Fife Gingerbread, Dads Rock and all their volunteers for providing what it considers a very important opportunity to fathers and their children to add a new dimension to their relationship, especially for those who are often unable to be with their children on a daily basis.”

If you would like to join in the Wester Hailes group then have a look at the Dads Rock Facebook page.