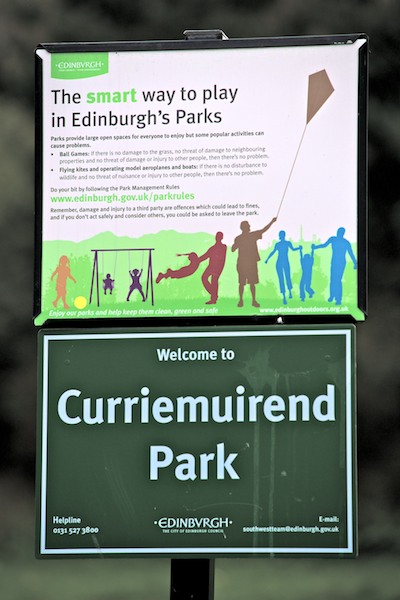 The proposed Local Development Plan (LDP) includes Curriemuirend Park as an area where some of the 36,000 houses needed in the city could be built.

A group called Save Curriemuirend Park was set up last year to try and ensure that the park is removed from the LDP when it is finally agreed.  The council’s own website describes Curriemuirend as “A park that was enriched with large amount of woodland planting during the millenium, it is now well established and provides a wildlife habitat next to the busy bypass.”

The council-run Edinburgh Outdoors website has no images of the park but invites you to submit your own.

A public meeting was held in February 2014 to discuss the outcome of a feasibility study which examined the proposal to build housing on the area. The meeting heard that the proposal would be to build 180 houses and form allotments on the park. Clovenstone Drive would have what are described as “greenspace improvements”.

The consultants reported that the site had some disadvantages in the form of noise from the by-pass and Wester Hailes Road and the fact that it is very uneven, but nonetheless there might be room for 180 houses on the site. Wester Hailes Road between Clovenstone Roundabout and Gillespie Crossroads would be narrowed to two single lane carriageways, and a new slip road would be formed to the development. The underpass to Clovenstone would be closed and a pedestrian crossing would replace it. There would be two pedestrian crossings on Wester Hailes Road, one at the southern end near the park entrance and the other just south of Clovenstone roundabout.

Trees would be planted at Clovenstone to replace those lost at Curriemuirend, and around 1750 square metres would be allocated to new allotments.

The public meeting also heard that even if a developer was found for this land it would be likely that any houses would not be ready for occupation within the next five years as the planning and development phase would take at least that long.

The two local community councils in Juniper Green and Wester Hailes along with the Friends of Curriemuirend Park have been pressing to have the area removed from the proposed local development plan so that the position is clear.

It was reported that the feeling of the meeting was that any brownfield sites in the city should be explored for development before a green space such as this.

The Digital Sentinel asked local representatives for their comments.

Councillor Ricky Henderson said:-“Like Councillor Bill Henderson, I’ve been working with Juniper Green Community Council to support their campaign to have Curriemuirend Park removed from the LDP as a site for development. The park has great potential to be used as a leisure resource for the surrounding communities and for various reasons is inappropriate for housing development. I am hoping that the arguments put to planners and elected members will result in its removal from the LDP.”

Councillor Bill Henderson told us:-“I have asked for Curriemuirend Park not to be included in the LDP, but of course this is ultimately a decision for the members of the council at in June.

“There is also a consultation period after that when representations can be made. “

At a special meeting of the Planning Committee on 19 March a deputation from  Juniper Green Community Council presented a statement about the proposals, explaining that they had tried since 2010 to improve the use of Curriemuirend Park by setting up allotments there. The Community Council also explained their alarm at the proposed changes on Wester Hailes Road which would only add to congestion in the area. They suggested two alternative sites within existing residential settings at Dumbryden and Curriehill, both of which are within council ownership, and both of which require development.

The Pentlands Neighbourhood Partnership then met in March to discuss planning matters, and specifically the proposed inclusion of Curriemuirend Park in the Local Development Plan. It is likely that the LDP will be presented to the Planning Committee on 12 June 2014 for adoption.

The Pentlands Neighbourhood Partnership asks the Communities and Neighbourhoods Committee to note the aim of Juniper Green Community Council to have Curriemuirend Park removed from the next version of the Local Development Plan (LDP).  “The conclusion of the recent feasibility study at Curriemuirend Park showed that development on the Park is not economically viable.  Building at Curriemurend Park cannot contribute to the effective land supply and would continue to dis-enfranchise large numbers of citizens in our community from CEC’s own green space policy.  So, Curriemuirend Park’s removal from the LDP would avoid planning blight, and thus enable the community to continue to use this precious green parkland in our urban surrounds for recreation and healthy pursuits, at the same time protecting an environment in which wildlife can flourish.”

Earlier in March Juniper Green Community Council sent a letter to the planning committee about the same issue. The local community councils have been cooperating on the basis that there is strength in numbers. This is the letter JGCC have sent:-

“To all members of the Planning Committee – please see the following statement from Juniper Green Community Council.

The recently published feasibility study on housing development at Curriemuirend Park, as set out in the first draft of the Proposed Local Development Plan published in March 2013, has concluded that the proposal for housing at this site is not currently financially viable, and is unlikely to be viable within the timescale of the Revised LDP now under consideration.

Even if there were a further significant increase in housing numbers, and a consequent loss of open space, this site still presents major development issues: traffic, air and noise pollution, and access to schooling, and without substantial tree cover a likely flooding problem. Housing on this site is therefore not going to contribute towards the 5 year effective land supply or be available to count towards future housing need up to 2024.

In view of the indicative findings of the feasibility study it would seem sensible to withdraw the Curriemuirend Park site from the Revised LDP on economic and social grounds, arising from the inherent difficulty of building there and to avoid planning blight.  So, Juniper Green Community Council asks you urgently to consider its complete removal from the Revised LDP before it goes to the Planning Committee in May, thus enabling the community to continue to use this precious green parkland in our urban surrounds for recreation, healthy pursuits and to encourage the existing wildlife there to prosper.”

The Local Development Plan is used by councils to set out general policies to guide councillors and planners when considering specific planning applications. All aspects of planning are considered during the consultation process including transport, habitats for birds and educational needs. Setting up contribution zones across the city means that any developer wishing to build there will have to make a financial contribution to things like transport and education in the immediate area. There is also a tram contribution in areas near the tram line.

There is more information about opposition to development in Curriemuirend Park on the Juniper Green Community Council website here.