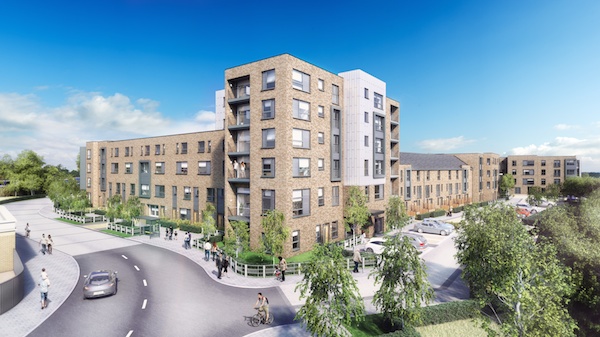 The site behind the Healthy Living Centre has lain vacant for a number of years, but it looks as though things are about to change!

Lovell have announced that they will be building the 183 new homes planned for the site. The City of Edinburgh Council is assisting with the funding to the extent of £3.7m, along with the Scottish Government.

The brownfield site previously occupied by two tower blocks will be developed in two phases.

The site lies next to the brand new Wester Hailes Healthy Living Centre and the Harvesters Business Centre. Construction work is starting this month on a two-year programme.

Designed by architects Cooper Cromar and developed by Places for People, the new development will provide 40 three-bedroom townhouses with gardens and 143 one-, two-, three-bedroom flats arranged in four- and six-storey blocks. Forty seven homes will be for affordable rent, 62 homes for mid-market rent and 74 homes for shared equity sale. Homes will benefit from a state-of-the-art district heating system.

In addition to new homes, the scheme will create local job opportunities as well as paid work placements and apprenticeship opportunities for local construction trainees. Trainees will have the chance to work on the Wester Hailes scheme for a minimum of six months and gain the Construction Skills Certification Scheme card qualification.  Lovell will also provide apprenticeship opportunities for trainees either directly with the company or through its supply chain partners.

Lovell was chosen for the scheme after tendering competitively as one of Places for People’s framework contractors. It follows the company’s successful completion of an £8 million, 93-home housing development for Places for People at West Gait, Edinburgh.

Colin Rae, project director Scotland at Places for People, comments: “We are delighted to see work begin on this site which has been derelict for nearly 20 years.  This development will deliver an important milestone in our promise to provide 1,000 new affordable homes for The City of Edinburgh.  We are looking forward to working again with Lovell on what promises to be another highly successful development.”

“We’re really excited to be working again with Places for People on a scheme which will make a major contribution to the regeneration of this area and create a legacy of lasting community benefits,” says Lovell regional director Alan Taylor. “Alongside modern and energy-efficient affordable homes, the project will boost the local area by bringing new jobs and opportunities for construction training.”