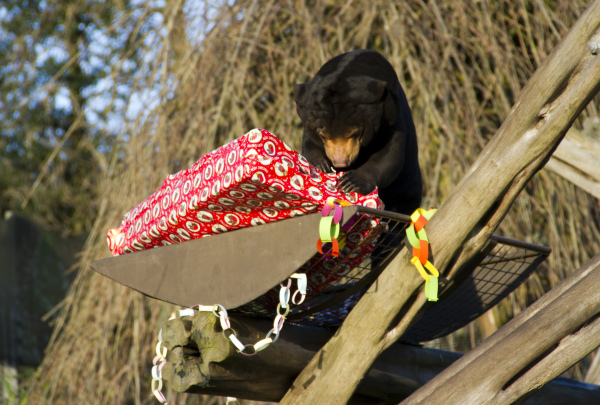 Christmas has arrived early for some of the animals at Edinburgh Zoo, as Father Christmas stopped by to deliver presents to the lucky Malayan sun bears and ring-tailed lemurs.

First stop on Santa’s journey was the ring-tailed lemur enclosure, where he delivered presents straight into the paws of the lemurs. After, Santa took a jolly journey up to the sun bears where he placed presents stuffed with meaty goodness, fruits and nuts under a decorated Christmas tree, before bears Rotana and Somnang were let back into the outdoor area. 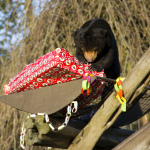 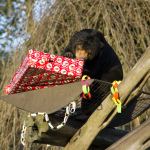 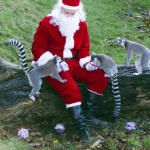 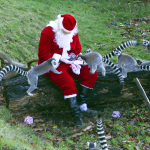 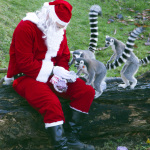 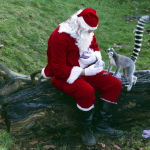 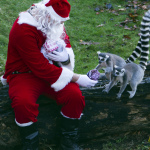 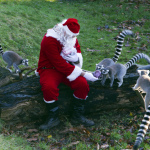 “Celebrating holidays with the animals is a fantastic way to think creatively about the enrichment we give to them. Lemurs are naturally inquisitive so anything, or anyone, new in their enclosure is of huge interest to them and they’ll definitely be getting closer to investigate – they’ll probably climb all over Father Christmas! This interaction is a great environmental enrichment for the lemurs as they really do love the attention.

“Sun bears may be the smallest species of bear, but their size is definitely deceiving as whenever we put real pine Christmas trees into their enclosure, probably their favourite enrichment device, they wrestle them to the ground! Rotana and Somnang will also be given wrapped up cardboard boxes which they love to get their claws, noses and extra-long tongues into and tear open – Christmas will literally be coming early for the boys as they’ll be getting two lots of their favourite enrichments!”

Enrichment devices are given to the animals to provide them with challenging and new experiences, which encourages them to display natural behaviours, for example foraging, which they would have in the wild. Visitors are able to purchase enrichment as Christmas presents for the animals at the Zoo through the Amazon Animal Wish List: www.amazon.co.uk/gp/registry/wishlist/1NE1L5UV462AL

The brothers, who are thought to be 10 years old, were rescued from the illegal pet trade in 2004 by the charity Free the Bears and arrived at Edinburgh Zoo in 2010. Illegal wildlife trade and habitat destruction are the biggest threats to sun bears, which are classified as Vulnerable on the IUCN Red List.

Sun bears are named for the distinctive crescent-shaped patch of golden fur on their chests, which is unique to each sun bear, much like a person’s fingerprints are unique to them. Sun bears are native to tropical forests across Laos, Cambodia, Vietnam, Thailand, the Malaysian peninsular, Sumatra and Borneo as well as the eastern edge of India and northern Burma.