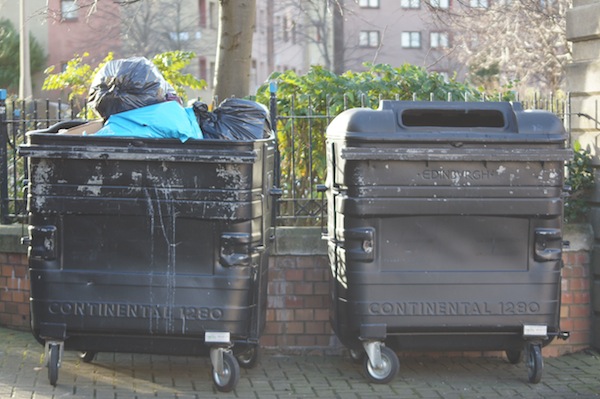 Recycling will be made easier for people living in tenements and flats around Edinburgh as part of two pilots launching next month.

Streets involved will see the capacity for recycling increased, as well as the range of materials that can be recycled expanded.

The first pilot will simplify the mix of materials that can be recycled by combining paper with cardboard, cans and plastic bottles in one bin instead of two. Where possible, remaining bins will be converted into glass recycling bins.

The second pilot will take place in areas where large 3200 litre bins are currently used for landfill waste, and will increase the capacity for recycling while reducing the space for residual waste.

Here, the mix of recycling materials will be changed as in the first pilot, but in these areas around a quarter of the larger 3200 litre bins will be used for mixed dry recyclables with the rest remaining as landfill. The smaller 1280 litre paper and packaging banks will, where possible, be replaced with glass banks.

It is anticipated that the scheme will be extended to the rest of the city’s flats and tenements following the pilots.

“Improving recycling rates is a real priority for the Council as we aim to drive down landfill and the associated costs, as well as making a positive impact on the environment.

“A similar approach to simplified recycling elsewhere in the city has already seen a significant drop in rubbish being sent to landfill, and I know that many people living in flats and tenements want to contribute to this.”

The pilot comes alongside the city’s new kerbside recycling service, currently being rolled out to 140,000 homes, which also aims to simplify recycling, expanding capacity for different materials. Initial figures show the redesigned service is already reducing the amount of waste sent to landfill.

Proposals to introduce the scheme were approved last year by the Council’s Transport and Environment Committee, based on public consultation by both Zero Waste Scotland and City of Edinburgh Council on residents’ attitudes to recycling in flats and tenement areas.

Findings include a general appetite to reduce the size of landfill waste bins while maintaining or even increasing capacity for recycling. Survey results also highlight a demand for more information on what to recycle where as well as a lack of facilities, particularly for glass.

For more information on the pilots, visit the Council’s website.