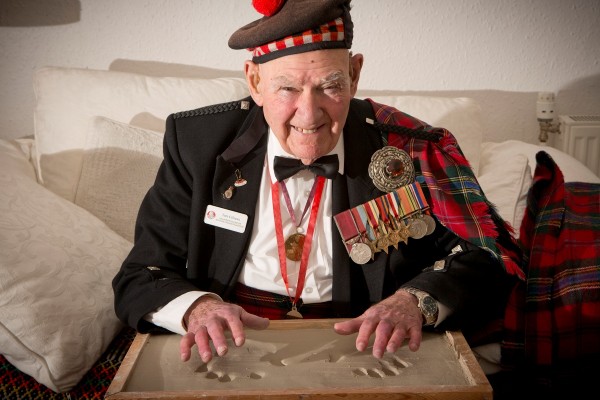 Edinburgh war veteran and charity worker Tom Gilzean has been getting ready to become the eighth recipient of the Edinburgh Award.

Like previous titleholders, Tom has had a cast of his handprints taken by local Edinburgh stonemason Nic Boyes. The handprints will be carved onto a flagstone outside the City Chambers, where they will sit alongside those of previous Edinburgh Award recipients Ian Rankin, JK Rowling, George Kerr, Sir Chris Hoy, Professor Peter Higgs and Elizabeth Blackadder.

Friends and family will join the Lord Provost at a special ceremony on 17 March, when Tom will be presented with a certificate and an engraved Loving Cup. Edinburgh Makar Christine de Luca will recite a poem written especially for Tom.

The former Royal Engineer was announced as the recipient of the 2014 Edinburgh Award accolade in December from a shortlist of nominations cast by the Edinburgh public. He has raised more than £100,000 for local causes, and continues to dedicate his time fundraising at the age of 94.

Nominations for the Edinburgh Award are made by Edinburgh citizens and the awarding decision is taken by a cross-party judging panel chaired by the Lord Provost, with representatives from Edinburgh Voluntary Organisations Council and Edinburgh Chamber of Commerce.

The Edinburgh Award enables the people of Edinburgh to pay a lasting tribute to someone who has made an outstanding contribution to the city. Tom is an inspiring man who devotes his life to raising fantastic amounts of money for charity, and we are extremely fortunate in this city to have people like him who so selflessly give up their time for the good of their community.