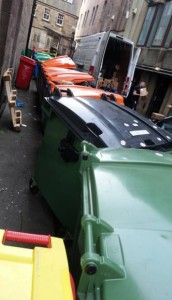 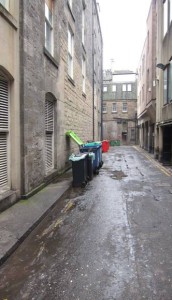 The City of Edinburgh Council have announced plans to removed trade wast bins from streets across the city.

Businesses will no longer be permitted to permanently store their waste containers in public, and will be required to present rubbish and recycling during timed collection windows.

The initiative, which aims to improve the appearance of the capital’s streets, has been trialled in a number of city centre locations over the last year. Participating streets Rose Street (and its lanes), Leith Walk and High Street experienced, on average, an 81% drop in the number of bins permanently outside business properties.

Now the policy will be introduced to traders across the city on a phased basis, beginning in April with around 5000 businesses in the centre. This will be followed by areas like Leith, Southside, Fountainbridge and Portobello.

Keeping the city clean and attractive will benefit residents, visitors and businesses alike, and removing unsightly trade waste bins from the streets is one big step towards achieving this.

It is extremely encouraging to see such positive results from the pilot areas, and there is no doubt the scheme will continue having an impact on our environment as it rolls out across the city.

After being approved by councillors in October 2013, the Trade Waste pilot was introduced to trial areas between January and March 2014, and has since seen bin numbers reduced from 390 to 103 on Rose Street, 116 to 12 on Leith Walk and 37 to eight on High Street.

Throughout the process, officers have worked with businesses to ensure compliance with collection windows, which were agreed after consultation on suitability, and to address difficulties over storage space, timing and cooperation from trade waste companies.

Gordon Minnis, owner of Rose Street North Lane restaurant Calistoga, is delighted with the impact of the Rose Street trial. He said:

The lane looks a lot smarter with only a dozen or so small bins whereas before there were over 40 large containers. It’s also led to a reduction in litter and fly-tipping.

Our customers are delighted as they have a much better view when dining and don’t need to navigate their way round large waste containers to get to our restaurant. 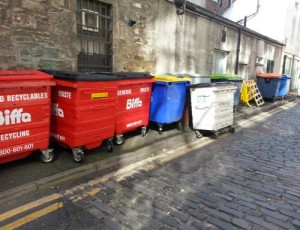 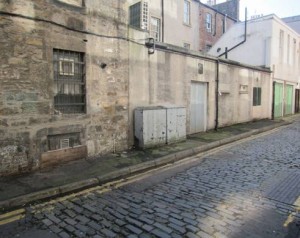 Andrew Watson, owner of the Princes Street franchise of McDonald’s, was also part of the Rose Street lanes trial. He said:

The overall cost of the process is more or less the same as it was before, only now it’s much easier to manage and looks a lot better on the street. My city centre store is in such an iconic location, sitting in the shadow of Edinburgh Castle, that keeping the streets around the stores clean and tidy is hugely important to the business.

As the scheme is rolled out, Environmental Wardens will continue to support behaviour change, helping businesses to adapt and ensuring enforcement, in order to gain the maximum benefit.

Businesses will receive letters to inform them when the changes are being introduced to their area.

Find out more about the Trade Waste pilot on the Council website, including guidance, a map of phase one and more case studies.