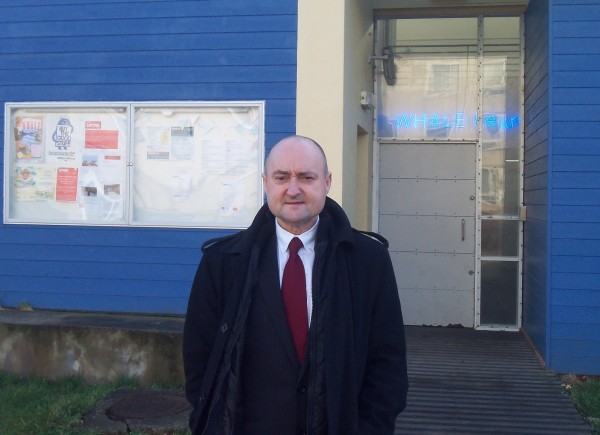 We recently interviewed Ricky Henderson the Labour candidate in the General Election for Edinburgh South West, about his background, the work he has done for the area, why he has decided to stand in the election and what Labour policies he thinks will have a big impact on Wester Hailes.

If you enjoyed this interview make sure you have a look at our interviews with the other candidates which will be up on the site soon!

I’m Ricky Henderson, I’m the local councillor for the Pentland Hills ward which also takes in part of Wester Hailes and I’m also the Labour candidate for Edinburgh South West in the General Election.

Can you tell me a little bit about you background?

I’ve lived, worked and brought up my family in the south west of Edinburgh for the last thirty-five years. Im a trade unionist and I stil represent union members, been a councillor for this area since 1999, represented about half of Wester Hailes in that time and then when the boundaries changed for the local council wards my ward changed to what was called the Pentland Hills ward. It still takes in a wee bit of Wester Hailes including Clovenstone and everything south of the railway line. I’ve maintained an interest in the Wester Hailes community for quite a number of years now and I’ve been lucky enough to work with all the many organisations and communities that live within Wester Hailes. I’m hoping for that involvement to continue.

Is there any sort of big projects or decisions in Wester Hailes that you’ve been involved with?

Yeah, sure many, I originally worked, when I first got elected, with the Wester Hailes Rep council which was the major organisation, it was the major voice of Wester Hailes, it was the major democratic for Wester Hailes. As well as all the neighbourhood councils that were represented on that so were all the agencies, of which there were, I think about a dozen at the time all of which were partially funded through social inclusion funding at the time. That was a sophisticated structure and it was an effective structure, and unfortunately it began to decline when the funding towards the social inclusion partnership started to reduce, and the measurement of relative poverty began to show Wester Hailes was becoming more successful and more prosperous than it once had been. And that meant there was a consequential reduction in funding because of that, until the point where we reached meant that the social inclusion partnerships were finished and we moved to a different model.

I’ve worked with all the agencies and I’m still involved with the people at Clovenstone, sometimes going to their management committee meetings. I’ve done some work with the church up there where the Dove Centre is now headquartered so they’re working to extend their premises to provide more community facilities but also better accommodation for the Dove Centre and their client group.

I’ve worked with Prospect in the past. I helped to set up the organisation called WEGARAH which was the West Edinburgh Group Against Racial Attacks and Harassment and I still chair that group working with various public agents and the black and minority ethnic community of Wester Hailes and the broader West Edinburgh, looking at racist incidents and policy and how organisations deal with supporting victims and pursuing the culprits.

Can I ask what it was that made you want to stand as an MP for the area?

Well I suppose I’ve always felt that I’ve stood up against inequality and injustice. I’ve been a member of the Labour party for twenty odd years. I’ve been a councillor in this area for sixteen years and I’ve lived, worked and raised my family in South West Edinburgh for thirty-five years or so and when Alistair Darling announced that he was going to stand down and make the decision to retire, I felt I was as well placed as anyone else to put my name forward and say that I would like to represent South West Edinburgh for the Labour party and for the local constituents. I sought advice from colleagues and family and I got the support that I hoped for, I put my name forward and I won the selection contest and was selected as candidate at the end of january.

Is there any sort of issues or policies that you or the Labour party are campaigning on that you think will have a big impact on Wester Hailes?

Yeah I do, I think there will be a number of things and they are all around the world of work. I’m a great believer in people working and making a contribution but also improving themselves and their lives through working and managing to develop a career but I think what holds a lot of people back just now is low pay. We live in a low pay economy and low pay culture and I think pay and conditions have been driven down over the years and I think that’s probably wrong. I think hard-working people should be entitled to a bit of money in their pockets and should be able to support themselves and their families and they should not have to be dependent on benefits particularly if they are working full-time. I think our commitment to increase the minimum wage to £8.00 an hour is a major step forward and that will allow working people the dignity to have a little money in their pocket and they can decide how they spend that money.

Linked to that Labour will abolish exploitative zero hours contracts. I think there has been a proliferation of zero hours contracts in recent years and it’s not acceptable to me that people should not know from one week to the next and not know what their income is going to be, waiting for the phone call to be working however many hours it might be. it might suit some people in some circumstances but I think the choice should be with the individual, if they want a defined contract with permanent hours then that should be put in place.

There’s also a commitment made by Jim Murphy at the weekend there at the Scottish Labour party conference that said that young people who did not go into full-time education or college places, that they should be able to bid into a fund of up to £1600 to support their ambitions in terms of entering the world of work, so that might be for buying tools for someone who is going into the building trade, or driving lessons or start-up costs for setting up their own business. I think for a place like Wester Hailes that is very important, we talk a lot about young people who go to college and university but we don’t always talk so much about young people who decide that is not for them and what support are they entitled to. I think this is quite an imaginative scheme that hopefully will be able to help young people to progress and develop the careers that they want.

What sort of impact do you think the referendum might have on the election?

The General Election is not a rerun of the referendum, clearly I think Scotland is still reflecting on the outcome of the referendum which of course was very clear-cut in terms of the no vote. My fear is that if the SNP do well in the election, well two things, first of all the better the SNP do the more likelihood there is of David Cameron remaining in Downing Street as Prime Minister and the Conservatives making up the Government and I think that would be a disaster for this country. Secondly, the more SNP MPs there are, they will return again and again to the constitutional question and I think Scotland needs to move on from that, we spent two years debating the constitutional question, we put the question to the people and the people gave a very clear answer they need to move on.

Is there anything that you would like to add at all?

It’s been a privilege to represent Wester Hailes for sixteen years and I look forward to hopefully doing that in the future, hopefully as an MP and the community will continue to have my support.