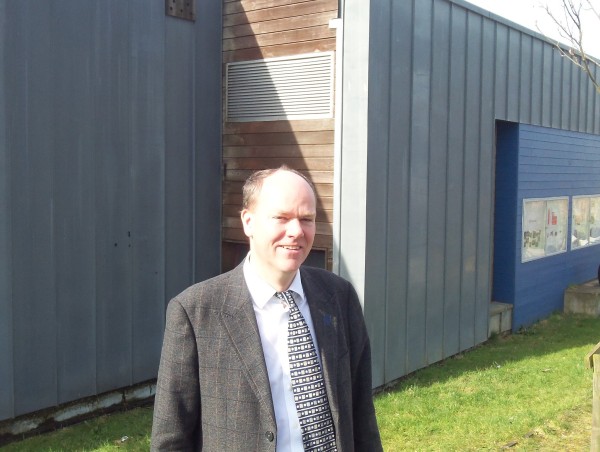 We recently interviewed Gordon Lindhurst the Conservative Party candidate in the General Election for Edinburgh South West, about his background,  why he decided to stand in the election and what Conservative policies he thinks will have a big impact on Wester Hailes.

If you enjoyed this interview make sure you have a look at our interviews with the other candidates – there are two others on the site already and more to follow.

My name is Gordon Lindhurst I’m the Conservative candidate in Edinburgh South West at the general election, 7th May. I live and work in Edinburgh. I live in the constituency. I’m a self-employed advocate I represent all sorts of people in the courts or advise them on things.

Can you tell me a little bit about your background?

I’ve been an advocate based in Edinburgh for the last twenty years. I’m not originally from Edinburgh I came to Edinburgh to university at 18 and spent the majority of my life since then in Edinburgh although in between I’ve lived in other places and studied and so forth. I’ve worked, lived elsewhere as well.

I come from a non-legal family background my father was a secondary school teacher in a state school. My mother was a nurse and she trained in Glasgow worked in the Gorbals before they demolished the old flats there years ago.

Can I ask what it was that made you want to make the transition from  legal to politics?

My interest in politics goes right back to probably when I was a teenager. It was my mother that got me interested in politics because she would discuss a lot of issues and things with me. In fact I’ve been actively involved in Scottish politics since standing in the 1999 Scottish Parliament election. I’ve stood at various elections in Edinburgh and Lothians over the past 15, 16 years. My interest is because politics of course matters, because the decisions that politicians make matter to all of us but also my involvement in politics as a volunteer, because I’m not a professional politician, is partly to try to influence the political process for the better. Hopefully that’s what all the people involved in politics are about. Politics is not just about parties and their policies but the people involved in it because you have  different views in all the different parties as well as between the parties. For me the important thing is about the people and what politics does for the ordinary people.

Is there any sort of works or experience you have in the area?

In Edinburgh, of course I’ve been involved in a number of things over the years for example Bethany Christian Trust. I’m a member of a care van team that goes out and gives soup and a roll to homeless people on Saturday nights I think most people will be familiar with that. I’ve been involved in other things I was honorary secretary of the Edinburgh branch of Alzheimer’s Scotland for a couple of years a while back. I’ve volunteered abroad as well, for example in Romania working with a local charity there as a team leader for going into orphanages and hospitals to bring supplies in, that sort of thing.

Is there any sort of issues or policies that the Conservatives are campaigning on that you think will have a big impact on Wester Hailes?

The Conservative policies on the economy are very important because they have had a beneficial effect on Scotland and throughout the United Kingdom in terms of bringing unemployment down, bringing employment up, giving people jobs. Also raising the income tax lower rate band so its taken a lot of people out of income tax altogether which is particularly important to lower wage people. These are the sort of things that I think will help people in Wester Hailes because it gives them the opportunity to get out of, if they are in, the poverty trap for example. It gives them the ability to help themselves which is in another way not possible without a good strong economy. Which doesn’t mean of course that we don’t need to look after people who are not fortunate enough to be in a position to help themselves.

What sort of effect do you think the referendum will have on the general election?

The referendum itself, that’s an interesting question of course, and something that everyone is discussing. I’m not a prophet so I’m not going to make an exact prediction. I think that clearly there are issues over what way people are going to vote, in light of the referendum. The referendum itself was I think for a lot of people a very divisive issue, even within families it has caused difficulties, even with people here in the constituency. I’m more interested in seeing how we can work together moving towards the future. I think its critical that people work together to improve things. Once we start dividing people up there’s no end of that.

I think that Edinburgh is a great city to live in, as I said I’m not originally from Edinburgh but it always seems to pull me back here. What I think’s important is we try to make Edinburgh a better city for everyone. Including in areas where some might think are not as well off as others.

Can I ask why it was Edinburgh South West you decided to stand for?

Well I suppose it’s partly because I have a connection here because I am currently living here. Not that I have lived here for the whole of the last twenty years for example but previously I did live here and I’ve always had a close connection with this part of the city. It’s a great part of the city.