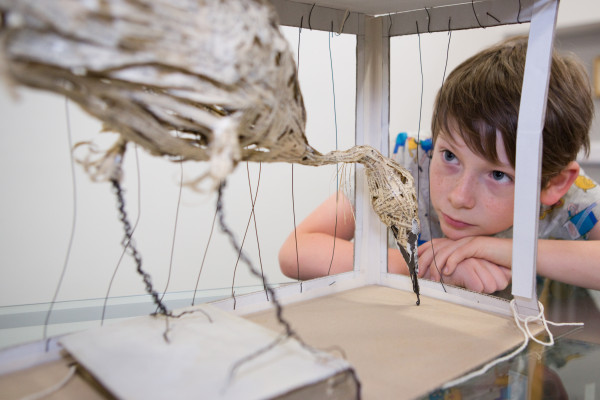 Beautiful paper birds that featured in a series of world-famous mysterious sculptures will be “set free” to mark the re-opening of an Edinburgh library.

The intricate caged birds will be on display to the public at Newington Library from today, Wednesday April 15th, to celebrate the re-opening of the library, which has been closed since January for building work.

Investment in this busy library has led to the installation of new heating, lighting and electrical systems, and fresh décor throughout.

The caged birds are part of several sculptures made out of books that have been placed around the capital since 2011 by an anonymous artist, leading to worldwide speculation about their source. The only clue about the inspiration was the same message left on many of them stating that they were created “in support of libraries, books, words and ideas”.

This particular set has been loaned to the library by the Edinburgh UNESCO City of Literature Trust. They were gifted to the Edinburgh International Book Festival in August 2013, when members of staff were surprised to find 30 paper birdcages after being tipped off by a series of tweets. They were accompanied by instructions to “set them free” at various locations.

We are delighted and honoured to welcome these intriguing sculptures to Newington Library, and thank the City of Literature Trust for loaning them to us. They are part of Edinburgh’s literary history and I’d encourage people to come along and admire them.

The Trust is delighted that the birds are finally free to fly within Edinburgh’s wonderful libraries. The generosity of the artist shows how important books, words and ideas are to people and all of these can be found for free in libraries.

You can find out more information about the mystery paper sculptures on the City of Literature website.