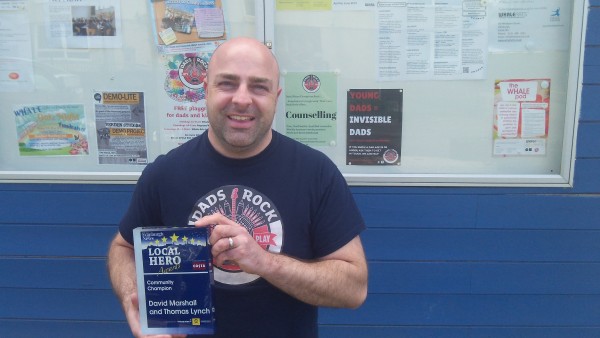 David Marshall and Thomas Lynch, the co-founders of Dads Rock, have been awarded the Community Champion award at Edinburgh News local Hero awards.

Dads Rock were nominated in the Community Champion category with Lauren Knight who set up a city branch of postnatal depression support group PANDAS, and Arthur Mathieson who helped set up the Edinburgh North East Foodbank in Leith. Dads Rock were chosen the winners by an independent panel of judges at the event on Friday 5 June at the Assembly Rooms.

The overall ‘Local Hero’ award was awarded to Jak Trueman after he dedicated his last weeks to fundraising for charity as he battled a rare form of blood cancer.

I’m still in shock to be nominated, never mind actually win the “Community Champion” award at the Edinburgh Evening News Awards which were held at the Assembly Rooms on Friday 5th June.

We have never looked at ourselves as heroes of any type. Although every dad/male care giver wants to be named “Superdad” from their children.
I want to dedicate this award to all male care givers and dads all over the world especially those who have came to our groups over the past 3 and half years.