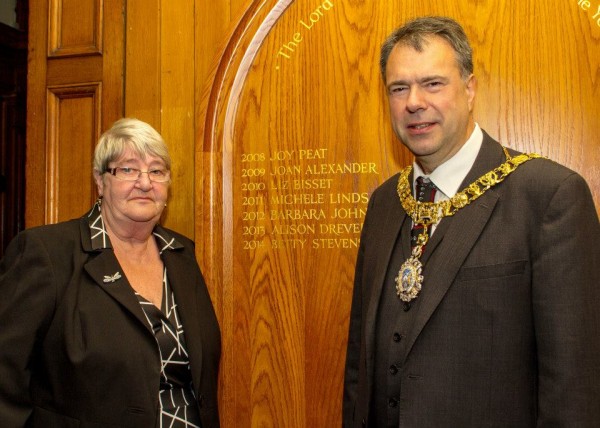 The Lord Provost with Betty Stevenson, Inspiring Volunteer of the Year 2014

A roll of honour celebrating Edinburgh’s inspiring volunteers has been unveiled by the Lord Provost at the City Chambers.

At a ceremony held yesterday, Wednesday 3 June 2015, to mark National Volunteers’ Week, unpaid helpers from across the city joined the Chief Executive of the Volunteer Centre Edinburgh Harriet Eadie and Lord Provost Donald Wilson to see the tribute for the first time.

The names of Edinburgh’s eight ‘Lord Provost’s Inspiring Volunteer of the Year’ award-winners have been inscribed on a bespoke Honour Board, which will be added to each year with the names of future titleholders.

The award is the top accolade at Edinburgh’s annual Volunteering Awards. This year’s ceremony will take place at the City Chambers on 16 June when the ninth person to join the roll of honour will be announced.

This most recent winner of the Inspiring Volunteer of the Year award was Betty Stevenson, Convenor of the Edinburgh Tenant’s Federation. A champion of tenant’s rights who has worked to make sure their voices are heard by those in power.

A few years ago I had the idea that Edinburgh’s volunteers should be celebrated in just as high a regard as our most famous and important names from history with a public tribute. I am delighted to finally see the Honour Board in place.

Each and every one of the names on this roll of honour belong to inspiring individuals whose volunteering efforts have changed people’s lives and earned them an award. One of those names is Betty Stevenson, Convenor of the Edinburgh Tenants Federation. She is a formidable champion of tenants’ rights and has worked tirelessly for years to make sure their voices are heard. I was delighted that Betty and so many other previous winners could join me for the unveiling.

In my role as the city’s Volunteer Ambassador, again and again I see how important volunteering is to the social fabric of the city. By reminding people about Edinburgh’s outstanding unpaid helpers, I hope the roll of honour will help inspire more Edinburgh citizens to start volunteering for the benefit of others.

Here is a video about Betty and the work she does from Volunteer Scotland: