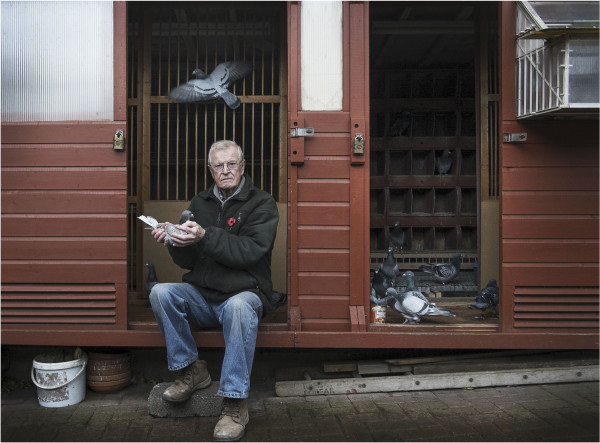 ‘Village Voices’ A portrait of Westburn contains photographs by local photographer Raymond Keith and Interviews by Digital Sentinel reporter Craig Tyrie. It contains photos and stories of people who live in Westburn celebrating the variety of community life there.

Below are the photographs and interview with Pat McLaughlin who talks about his love of keeping and racing pigeons.

Please listen to the interview with Pat McLaughlin here: 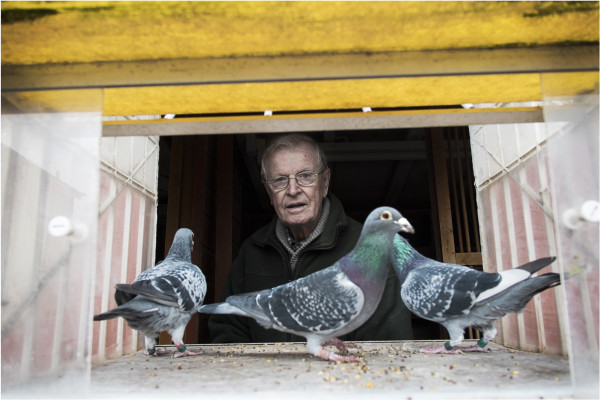 Is there any work you’ve done around the area of things you like to do?

I’ve never really, I’ve got the pigeons so that kept me occupied, you know?

How long have you been keeping pigeons and what got you in to it?

When I moved up here after a few years I got pigeons, in 1990s I joined a club, the local club you know, Sighthill Homing Society. It’s good, a good club, you know. Nice, good members you know, nice people that runs it and that. Its more or less moved on since then, you know.

I like to have pigeons, you know. Its a good hobby

With racing, there’s nine inland races. What I mean by inland races is starting off from Pentland federation and race down to Maidstone. That’s the farthest inland race its about 362 miles and that’s the longest inland race, that’s the inland national. Then you can go to France, and race from France which is 550 odd miles. People that live further away from me to the race point it’s slightly more, a bigger distance you know.

Aye its good, you know, It’s a good hobby.

What’s your favourite thing about racing the pigeons?

I like training them, you know, taking them away in the car and training them. You start off and take them down to Galashiels or Selkirk and that, you know, and then they fly back here. It gets them fit like any other person would do if he’s training for the Olympics or that, you’ve got to be fit. The birds are in the same category, you know. They’ve got to be really fit to compete with the other birds. It’s all right.

You take them down to Broomhouse on a Friday night and you get them racemarked. It’s all electronic timing now, so we don’t need to put rubber rings on them. You just take them down there, you get a wee clock and you just put them through and they have a little electronic ring on them. You just scan them. Once that’s all finished you go over to Danderhall. A big transporter sits there all over the Pentland Federation. All over they have their assembles there on a Friday night birds are all loaded on then taking down to parts of England, Newark, Peterborough all these different race points.

They arrive there late at night, then they are sitting all night. Morning comes, the race controller, he’s in charge of the birds line of flight into Edinburgh. If the weather’s all right good, it’s no so much wind but rain. if it’s all clear, *whitsles* you cut the strings and off they go. The race has started. If it’s one hundred odd miles you probably get them in less than two hours, you know. They do maybe sixty mile an hour if the weathers good and if the winds sort of behind them, you know. If its prevailing wind and the wind is facing them, the velocity’s down.

Its good, its good standing out waiting on them. I stand on the Saturday waiting on them and you talk to different people to make it faster. It’s good you know, I quite like it. I’ve won a few races but there’s that many young boys that’s good at it, you know! *Laughs*

I’m no really into it for, I mean everyone likes to win, but I’m not one of those people who stands with a long face on a Saturday if the birds are late and somebody else has timed in, you know. I just wait on them to come, if they come get them in and move on to the next race. It’s like the football, you know if you don’t win on that Saturday, scrub that match and move on to the next one. You get a lot of satisfaction when you see the birds coming, you know, that’s the thrill.