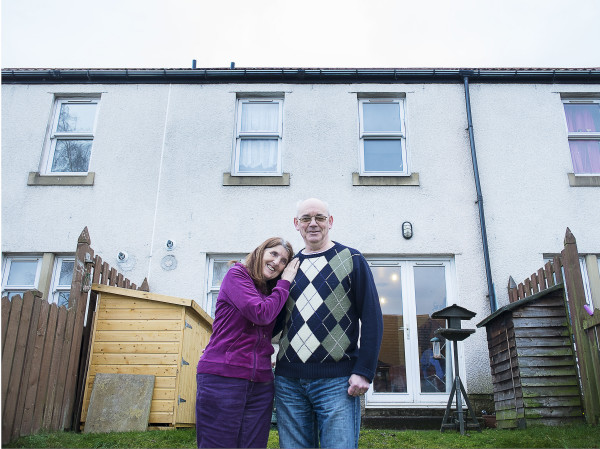 ‘Village Voices’ A portrait of Westburn contains photographs by local photographer Raymond Keith and Interviews by Digital Sentinel reporter Craig Tyrie. It contains photos and stories of people who live in Westburn celebrating the variety of community life there.

Below are the photographs and interview with Tom and Beth Jamieson who speak about the Westburn Community Centre and Tom’s love of boats.

Please listen to the interview with Tom and Beth here:

f you are unable to listen to the interview here is a transcript of what was said, Beth Jamieson’s responses will be in italics:

We stayed in Westburn Gardens block one, which was a block of 52 houses and Westburn Gardens had seven blocks. There was six blocks of 52 and the seventh block, that was the big one had 112 houses in that. That’s roughly where Prospect Housing Association is, that’s where block seven was. The only reason I know the figures is because I used to deliver the Sentinel to the whole of Westburn Gardens. That used to make me about one and a half two hours to do the whole lot.

Theres not so much for kids to do these days and there’s no where really for them. Nope. For them to go to in the evening, like they had the Community Centre before and they could always go there and meet there.

When the Community Centre first arrived on site it was all the local men of Westburn who came out to put it together because it was two wooden school units that had to be joined together. The office and shop and the toilet that all had to be built-in the middle.

I would like to see something for the children.

What sort of things in the area do you like to do for fun?

Well I’m a boatman, so I drive the boats along the canal. I do do that. During the Summer months providing I’ve got the energy I’ll take the boat out as well, canal boat.

I’m licensed to take out up to 251 passengers, so I can take the bigger boats out as well. The biggest boat on the Union Canal here is the Re-Union boat and that carries 36 passengers. It’s 60ft long and 10ft wide. It’s a wide beam. The widest you can take on the Union Canal is 12ft. You go anymore than that you won’t get across the aqueduct.

What sort of things do you do on the Canal boat or is it just leisurely sailing?

I do some leisurely sailing and if I’m asked to take passenger boats out, providing I’m free, I’ll do it. I also help out at Linlithgow Union Canal society so they have boats as well to take out. They have a fun event every year they have a cardboard boat race. Some of them sink, some of them don’t. Quite a few sank this year. I get asked quite a lot on the Canal. Some of the visitors you can get along to the Falkirk Wheel and back again in one day. When you tell them you can’t it’s “why not?” because there’s a speed limit on the canal of four miles an hour. Drivers are only allowed to drive for four hours maximum in one day and its an eight-hour trip to get to the Falkirk Wheel

If I’m driving I would I never ask a crew member to do something I’m not prepared to do myself because there’s some dirty jobs on the boat. The worst one I’ve had is I’d take the St Madeline out and I’d taken it over the aqueduct at Linlithgow and I’d gone into the turning hole and I got caught up in a bed mattress on the bottom of the canal. We could not get this bed mattress off the propeller so it was on with a wet suit, wire cutters and snorkel and face mask and over the side of the boat I went and underwater to cut off because I couldn’t get through the weed hatch. It was wrapped right round the prop, so I had to go underneath the boat. I had all of my passengers off the boat taking pictures of me. It took me about ten minutes to clear it and then between the crew and myself we hauled the mattress on to the canal and left it on the banking.