Welcome to Redpath’s Corner, our weekly column from local boxer Lee Redpath! Keep up to date with boxing news and follow Lee each week as he trains for the new season!

I’m really looking forward to watching my best friend, Craig McEwan in his fight this weekend at the Lagoon Leisure Club in Paisley.

We grew up together in Wester Hailes and was the person that got me into boxing back when I was just 11-years-old.

He has a tough opponent in Welshman, Lee Churcher who has won his last six fights, picking up the British Masters and Welsh Area titles along the way, so he will be feeling confident for this one.

However, I just think that Craig will be too fast and too clever for him and will get the win. 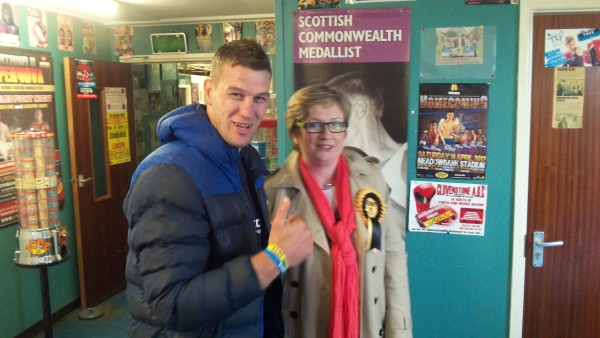 Craig Mcewan with local MP Joanna Cherry during the election

At 33-years-old, I still think that Craig has a lot to offer in boxing. I suppose it mostly depends on how he’s feeling and as long as he’s still fit and still enjoying it then he’s definitely capable of winning an Area title and even more, he’s got the ability and certainly got the experience.

He fought at the famous MGM Grand in Las Vegas on his debut over nine years ago. Although I never managed to get over there, I always watched him on TV or on a website stream somewhere.

He was signed by Oscar De La Hoya’s Golden Boy Promotions. He went over for a holiday to America and rocked up to the famous Wild Card Gym in L.A. and top coach, Freddie Roach who trains Manny Pacquiao, told him to stick around. He basically went on holiday, got offered a contract and never came back!

He was last signed with Lou DiBella in America and nothings really happened lately so he’s come back home although he’s still under contract.

It’s brilliant for me to be able to train alongside someone like Craig and to have the experience that he can pass on to me is so valuable.

I’m in action myself on September 5th in Edinburgh and thanks to my training and sparring sessions with Craig, I’m feeling fitter than ever before.

I hope that we can continue to work together to help spur each other on to success in this hardest sport in the world.