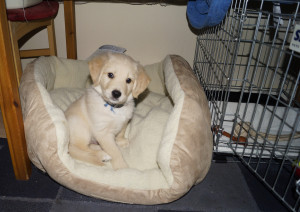 This is me when I was nine weeks old

There are many ways to toilet train your puppy, so this is how I became fully house trained by the time I was sixteen weeks old.

Show Your Puppy Where the Toilet Is

Training your puppy to do the toilet where and when you want is not that difficult if you understand how a puppy thinks and you know their routine. Once armed with this information you can toilet train a puppy very easily …chew the toilet… by showing them where the toilet is exactly when they are needing to go.

When you are able to supervise puppy, these are the key times to watch out for:

After waking up from a sleep, after playing, after training, when something happens that is exciting (like a visitor) and after eating meals.

This won’t stop all accidents because when you got to go, you got to go, but it will reduce the number of accidents and because you are showing puppy where to go, puppy will make it their mission to be able to get there by themselves. It took me eight weeks and it may be more or less for your puppy but once it’s done you can have a toilet free house. It’s important to show them what you want because telling them off gives no information as to what is the right thing to do. So show them what to do and never expect them to know before you show them, and it takes many times.

So what about when you can’t supervise your puppy? 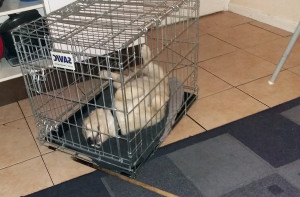 Here’s me sleeping very happily in a crate

My human used a crate.

Now I know you humans have a thing about confinement and it’s only because you never do it in a nice way. It’s always a punishment! But not for puppy, a crate can be an enjoyable place for puppy to sleep and it has a brilliant advantage.

Please Note, A crate should never be used as as a punishment. In fact you should never punish a puppy or dog for anything and I’ll tell you why in another blog. It’s actually common sense and I bet you already know why!

Puppies do not toilet where they sleep

A puppy will not toilet where it sleeps, unlike a human puppy, so think of a crate as a bed with no room for a toilet and while in the crate your puppy will wait till they are let out to do the toilet. So if you can not supervise your puppy then you can pop them in the crate for a sleep until you can supervise them. Once you take them out the crate go to the toilet because they will be bursting to go!

You should not leave an eight to ten week puppy in a crate more than two hours during the day before getting out to the toilet. As puppy starts to get older you can increase it and no puppy nor dog should be crated for more than four hours at a time during the day. But in an ideal world, puppy will be supervised by someone in the household all the times and a crate is only used for night time.

So with this knowledge you can manage puppy and by showing them they will get into the routine of going to the right place to do the toilet. 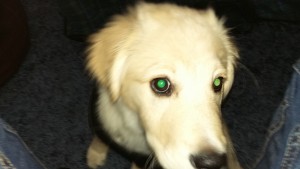 Puppy has super Jedi powers in the crate. So, so use them and help puppy, to help you, not have accidents all over the house.

So How Do You Use a Crate?

The crate should be big enough for your puppy to lie down and turn around and no more room than that. Sounds harsh but your puppy is not concerned in the way you might be, all puppy will do is go to sleep.

So to start, it’s chicken and treats …chew the chicken… Open the crate up and throw in a treat. Get puppy to be happy going in and out without closing the door. Do this a few times until they start running in the crate in hope of getting a treat.

Once puppy is happy to go in and be in the crate move the door to nearly being closed and treat puppy. Next treat as the metal door clangs and once you have done this a few times you will notice that puppy will run into the crate when you open the door and won’t mind when the door closes. By using treats you are associating the crate and the door closing with something that puppy loves and gets excited about and so loves and get’s excited about the crate.

Once puppy loves the crate you now have a “tool” to control puppy when unsupervised and using the knowledge that you know for sure, puppy will do the toilet after sleeping, playing, excitement and after meal time you should be able to manage your puppies toilet. It will be different for different dogs but if you persevere with showing puppy where to go by knowing when they will go to the toilet, you can stay one step ahead and quickly teach your puppy to wait until they get to go outside. Because you are showing them, they will understand what you mean and try their best to do it. Puppies don’t understand words and they don’t understand punishment for what is the most natural thing to do in the world…the toilet.