We have had a review sent in to us by one of our community reporters about his visit to the Edinburgh International Book Festival 2016. 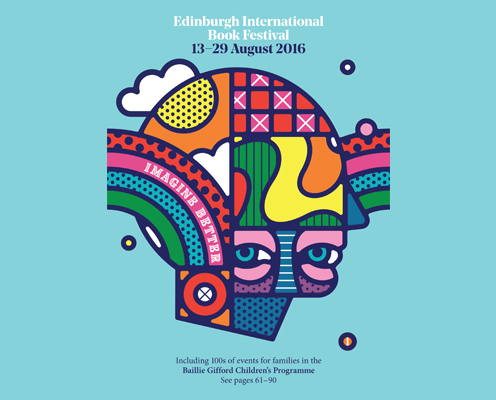 I had never been to the Book Festival at Charlotte Square so it was good to tag along with a group of folk from Number Six which is just round the corner in Hill Street.  We went on a sunny afternoon and moseyed around giant marquees stacked with displays of new books which you could buy – mostly on Scottish subjects by our native writers.  Included in the visit was a Talk about the Battle of Culloden by Professor Murray Pittock to promote his new book  – Culloden. (Number Six had been donated complimentary tickets – which were expensive).

We left the bright warm sunshine and entered a darkened marquee with a spotlight podium and banks of comfortable seats in a semi-circle (it reminded me of Mastermind).  The event was stowed oot so it was good that our party had been waiting at the head of the queue.  It soon became hot and stuffy but the talk and ensuing Q&A was so interesting that one forgot this discomfort.  An interlocutor on stage asked the author to comment on some of the false myths which have obscured the facts of the tragedy of Culloden, such as “it was English V. Scots battle” with an “English Army” in the field when in fact there were many Scottish born soldiers among the Redcoats and it was a British Army, which had been hurriedly transported back from the Low Countries where a war with France had been dragging on for several years.

The author referred to the myth of the muscular virile Clansman towering over the puny English toy soldiers, illustrating this with a slide of the famous contemporary painting of the Highlanders charge at Culloden – the reality was that most were undernourished, stunted in stature from poor diet and in even worse shape during the poorly supplied and organised Jacobite campaign.  Another interesting myth discussed was the Clan system itself which appears to have been a type of primitive feudal system where tenant farmers were tenant farmers were enthralled to Clan Chiefs and their close relatives. So while there was fierce loyalty by many to their Chief, lots of Clansmen reluctantly had to toe the line or risk losing their crofts.  But there was some security in belonging to a Clan and it offered mutual aid and protection in the lawless Highlands.

The cruel aftermath of Culloden and the ‘Pacification’ of the Highlands is certainly no myth but in years to come there was some sense of shame – the last battle fought on British soil was never commemorated on Redcoat regimental flags.

Unfortunately “Culloden” is pricey but you will be able to order it from it from your local library – it is definitely worth reading!