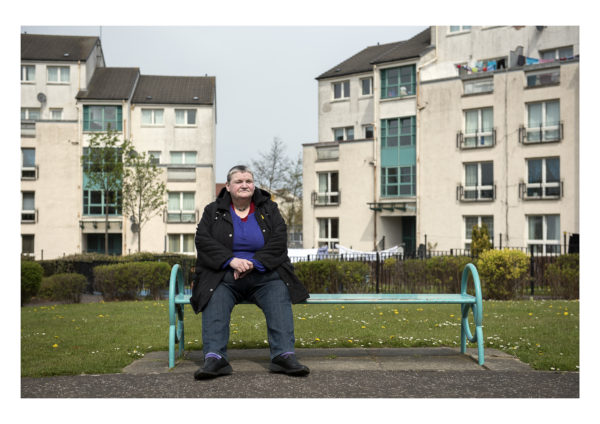 Below are the photographs and interview with Mo Connolly who speaks about her experiences when she first moved to Clovenstone and some of the work she does in in the community.

You can listen to the interview with Mo here:

My name is Mo Connolly and I live in Clovenstone Park and I have done for the last fifteen years. The first house was in Clovenstone Drive which is no longer there, Alcorn Square is there now. Then when that got demolished I moved over to Barn Park and I was there for seven years. I applied to Wester Hailes Housing, which became Prospect on the same day as I signed the missive, so I’ve been quite a happy tenant for fifteen years.

How have you found the area?

When I first came here, 25 years ago, I thought “concrete jungle” cause I had lived in Fife previously but hadn’t seen anything like this. I’d heard the reputation and I thought “you know what just go with it”, but I’ve went with it and I’m still here! I’ve worked at it and I’m proud to live in Clovenstone, yeah it gets its knocks but where doesn’t?

Back then I had nothing really to fill a house with. I knew nobody but a lot of people rallied round me and pointed me in the right direction. I did get a lot of help from the paper copy Sentinel, at the time, because you could see what was going on in the area. I became involved in the neighbourhood councils and such like and became an activist. Continued to be involved with Prospect and Wester Hailes Community Trust.

What sort of work do you do with Prospect and the Community Trust?

Prospect I’m on the Committee as Secretary. I’ve been on that committee for eleven years. So I was a tenant first and then I went on there. Then WHCT I’m learning the ropes. I’ve been to a few meetings and I’m quite hopeful that it’s going to take off. We are going to provide people with money to do projects and I’m quite looking forward to that. It was a big thrill for me to stand at the Healthy Living Centre in December with that big cheque, you know, for the £65,000. Fantastic. It really puts Wester Hailes on the map and the changes that have been here are phenomenal. Lovely park out the back there used to be a wasteland, horrible. Now on a sunny morning when you look out, its lovely out there.

Can I ask what your favourite thing is about the area?

Community spirit. I mean everyone in Wester Hailes might not have much, but we are all willing to help each other. I know that cause when I was ill about six years ago, the amount of help I got not just from people in my stair but everyone. If anyone is allocated a house around here and they don’t have anything, people rally around and the house could be filled! That’s the way I think it should be.

Is there any big community campaigns that you have been involved in the past that you are proud of?

People know me round here as someone willing to help. I suppose that’s another achievement when I think about it because its only been say in the last five years that I’ve started to gain more confidence. I would always do things but I’d be in the background. Like five years ago I couldn’t imagine sitting here like this or have my picture in the Sentinel. But yes, I suppose that is an achievement.

Is there anything you would like to add at all?

A lot of people say to me “Where do you live?” and when I say Cloventone. “Oh that sounds nice. Where’s that?” and when you say Wester Hailes you see them go oh. My friends from Dunfermline have been over here and they can’t believe how much greenery there is. We’ve got a park out there. We’ve got the Pentlands. I mean its not so much a Concrete Jungle now. The green spaces help!