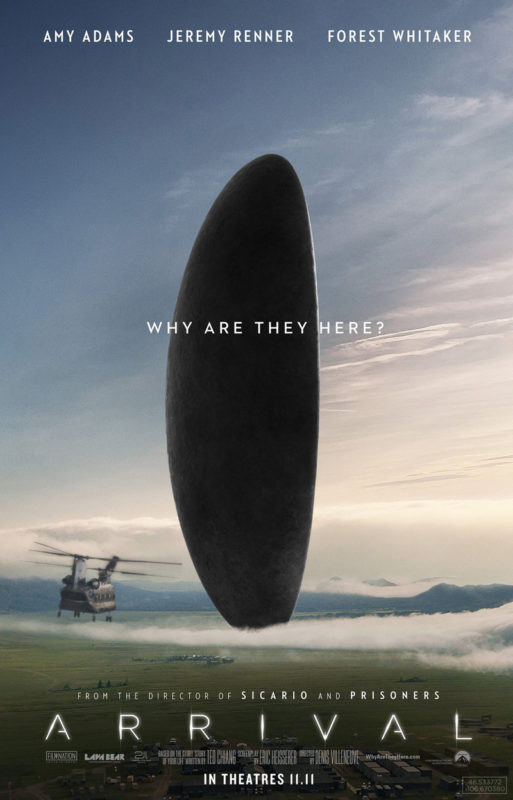 Here is a review of the new film Arrival submitted by one of our community reporters. To read more of our reviews by local people click here.

ARRIVAL has a familiar Sci-Fi plot – 12 UFOs land at different locations on Earth and as the spacecraft are inert and the aliens don’t emerge humans attempt to make peaceful contact to find out their purpose in visiting. (Usually this ends in tears, for example in MARS ATTACKS!).

One craft has chosen to land in Montana USA (it actually hovers a few feet above ground). It resembles a giant Garlic Baguette and very rapidly the site is surrounded by a large military force. The Americans assemble a small group of scientists as a contact team, including Professor Louise Banks (Adams) a linguistics expert who is required to be the translator. This is taking place in the context of mass panic and 24/7 TV News coverage which merely inflames terror.

The small party of emissaries enters the spacecraft up a sloping tunnel which resembles a coal mine, finding they are obliged to walk upside down on the ceiling! They are received in an audience chamber separated from the aliens by a glassy wall behind which is swirling mist. Their appearance veiled in fog is awesome and disturbing; the dramatic and spooky music adds unease. The music score for this film is exceptional, electronic sounds are mingled with classical instruments and wordless choir – the End Credits as well have a wonderful music sequence.

The subject of ARRIVAL seems to be communication in general, not just with Aliens – we see communication misunderstandings between individuals in relationships as well as between States with different languages and cultures. Television News coverage seems to misrepresent actuality and you begin to feel that it is the Human race itself which is alien, unpredictable and to be feared as much as the visitors from outer space and that humans are a threat to their own planet.  The bizarre form of communication used by the Aliens is scary – Dr Banks throws herself into decoding this and undergoes a personal voyage of self-discovery. Amy Adams is a gifted actor who seems to act each role with an interior “Method” style approach pioneered by Marlon Brando. Her performance in DOUBT a few years ago was stunning and she took both Meryl Streep and Philip Seymour Hoffman to the cleaners with her understated performance.