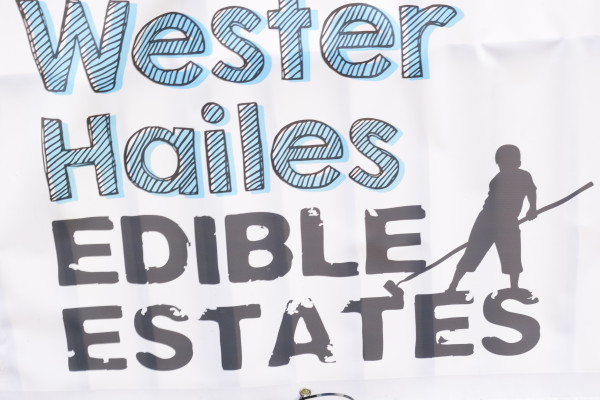 Wester Hailes Edible Estates has released an update about some of the recent developments in the Hailesland Wee Soup Garden as well as their recent Autumn Festival.

The Wee Soup Garden was a hive of activity on Friday afternoon with 10 gardeners getting stuck in to do some weeding and some planting. So, come spring time there will be an abundance of colourful daffodils brightening up some of the beds. We also planted some garlic which will be ready to harvest in July.

The Autumn Gathering took place on Saturday 19 November 2016, it was run in partnership between Edible Estates and With Kids. Not only was it a chance to celebrate all the  progress that had been made in the Wee Soup Garden, but was also used as a consultation to get the views of local people on how they would like to see nearby green spaces used.

It was a very cold, but beautiful day so we were able to enjoy a range of indoor and outdoor activities. Inside our natural play worker, Shona, engaged the children who came in with making Christmas decorations at her craft stall using acorns, dough stars, paints and glitter, which was lots of fun!

One of the main findings from this exercise was that people would like to there to be more for kids to do in the area. One resident wrote “a place where children can have natural play”, for example. David is continuing to conduct surveys in the area so the results of this will be published once it has been completed. These results will also be compared to the ones from a door to door survey Edible Estates carried out in June.

The Wee Soup Garden group meets every week on a Friday 2.00pm, at The Wee Soup Garden in Hailesland, which is situated beside the playground behind Michael’s Shop. Delicious hot soup is available to all who come along and both adults and children are welcome.