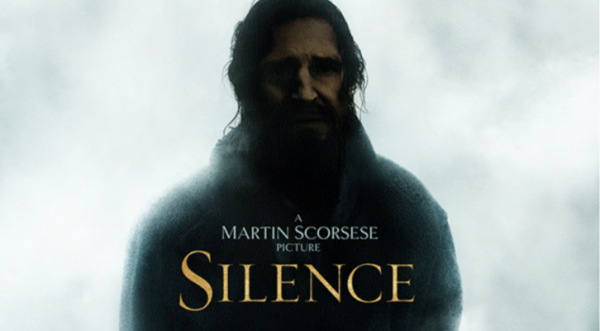 Here is a review of the new film Silence submitted by one of our community reporters. To read more of our reviews by local people click here.

SILENCE is a long movie at 180 minutes – the Epics of the 1960’s such as LAWRENCE OF ARABIA were very long too but had a half-time intermission. I had to have two comfort breaks during this marathon, returning both times to see heads rolling over the execution yard upon which a variety of tortures are extracted upon Jesuit Missionaries to Japan in the 17th century along with their Japanese Christian converts.

The story, based on historical facts, concerns Portuguese Jesuit missionaries who are sent to Japan to convert what they see as a heathen race to Christianity. Liam Neeson gamely takes on this ‘Big Ask’ and two younger priests follow in his footsteps some years later – the Jesuit Order by this time has decided it is not possible to evangelize Japan and only reluctantly allows the two rookies to go. Liam Neeson has gone off the radar for several years, not having returned from the Land of the Rising Sun, so the pair may discover his fate.

I felt this movie to be powerful and visually beautiful – (although it rains a lot of the time in Japan) and I felt involved in the adventures of the 2 missionaries and the Japanese peasant converts who help them (at personal sacrifice). I wisely attended an afternoon screening (if you went in the evening you’d probably miss the last bus, for ‘SILENCE’ is very long). I have not revealed too much of the storyline which springs some surprises.

We all know Martin Scorsese’s work which spans several decades – (personally I would rate his ‘RAGING BULL’ the greatest movie ever made). ‘SILENCE’ contains many of the themes that haunt Scorsese’s work notably his painful relationship with the Roman Catholic Church. As an altar-boy in his youth he felt drawn to the priesthood but became a film-maker instead – to our benefit. Many of his movies refer to Catholic imagery – the boxer Marcel Cerdan’s defeat in the Ring by Jake LaMotta in ‘RAGING BULL’ is portrayed as ‘Christ taken down from the Cross’ for example. Scorsese tells the story of the Jesuit Missionaries to Japan soberly and with respect for their courage, of their capture by the Japanese who attempt to make them renounce their Faith through persuasion and final torture and execution (many Japanese peasant Christians suffer the same fate). A key moment in the movie happens when the Japanese interrogator tries to explain the Japanese point of view to one of the Jesuits. In essence he explains that Japan has its own spiritual inheritance – Shinto and Buddhism (of which the European are blissfully ignorant) and also the fear that the Portuguese wish to colonise Japan for commercial profit. The Evangelical missions are merely a means to this end and have no divine purity of purpose as far as the Japanese are concerned. He also points out that many uneducated peasants have suffered and died as well.