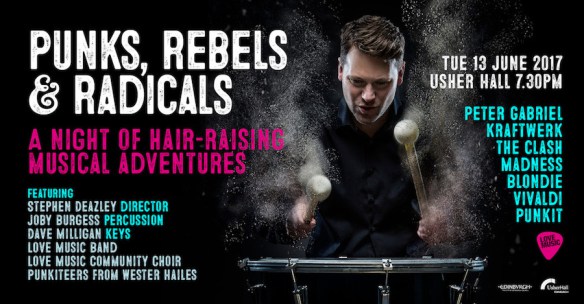 Pupils from Sighthill and Clovenstone Primary school will be joining Edinburgh charity Love Music to take part in Punks, Rebels and Radicals concert at the Usher Hall on Tuesday 13 June 2017.

Over the course of 11 weeks, the 60 Punkiteers from Clovenstone and Sighthill Primary Schools have been learning Punkit with professional percussionists Alasdair Rankin and Jeanne Laidlaw, Stephen Deazley and soloist Joby Burgess, which they will perform on a wide variety of hand-held percussion instruments, scrap metal, and their own punked-up cardboard boxes. They are joined by the band in their final rehearsals and will then present a performance that is part percussion concerto, part giant groove machine – fuelled by a little bit of anarchy and a lot of fun!

Punkit is a project by Love Music commissioned by Bedford Creative Arts, which brings together a massed percussion section of young people to perform the eponymous piece, Punkit. Speaking of his inspiration for the piece and project, Deazley says:

…there is an anarchy and intensity in music that comes from the street which found expression in the British punk explosion of the 1970s, and a simplicity I found in my music-making during the 90s that was irrepressible and irresistible, where music spills off the stage as pure life-force. Punkit started with this idea: to make a work with young musicians that really knocks your socks off in intensity, urgency and drama.

Love Music has run the 330-strong Love Music Community Choir at the Usher Hall since 2013, supported by the City of Edinburgh Council, and its members come from many different backgrounds and levels of singing experience. Artistic director Stephen Deazley, an award-winning composer and renowned educationalist, directs his own special arrangements of an eclectic range of songs, with previous concerts featuring everything from Mozart to Joy Division. As part of the charity’s underpinning aim of giving amateur musicians regular opportunities to work on an equal standing with exceptional professional musicians, the choir is accompanied by Dave Milligan, a pianist in high demand across the jazz and folk scenes throughout the UK. The concert will celebrate the choir’s 14th term together singing songs with rebellious or radical histories by composers and bands ranging from Vivaldi, The Clash and Kraftwerk, accompanied by Milligan and an outstanding professional band.

The concert’s grand finale will bring all performers together for in songs celebrating the exceptional, fun and adventurous work of the charity and the musicians of all ages and abilities that it works with.

Love Music inspires and empowers people to be curious, creative and adventurous with music, bringing them together with professional musicians to produce music of exceptional quality, regardless of their skill base or background. Love Music’s aim to provide accessible experiences for everyone extends beyond the amateur musicians which whom it works to include audience members, offering free tickets to unwaged people and under 16s and a range of concessions for all areas of the hall. Tickets are available from the Usher Hall.

The income for this concert will raise funds for Love Music Junior Choir, for 200 8-12 year olds, which will start at the Usher Hall in September 2017.