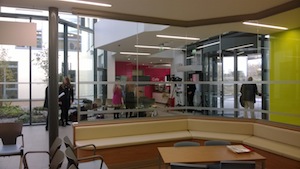 There was an offical visit today by the Scottish Health Secretary to the Healthy Living Centre. The whole centre was abuzz this morning with media people,cameras and lights.

The Minister was here to promote a new cancer awareness campaign,led by a TV advert featuring Sir Alex Ferguson,which is being rolled out throughout Scotland. 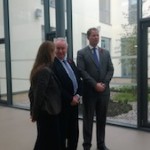 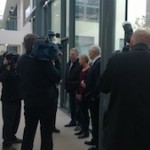 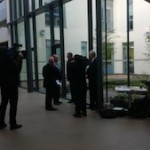 A campaign starring football legend Sir Alex Ferguson has been launched to help increase the early detection of lung cancer.

The former football manager talks about how early detection of lung cancer can give you ‘extra time’ to spend with your family.

He also stresses that although he lost both parents to the disease, lung cancer is much more treatable these days, and people do survive it.

Mr Neil said: “Lung cancer is the most common cancer in Scotland, and this new advert encourages people to get checked early if they have a persistent cough or cough that has changed or any concerns.

“Lung cancer is much more treatable than it used to be. The earlier lung cancer is detected the easier it is to treat and the better the chance of a successful outcome.

“More lives can be saved in Scotland through earlier detection. It is great to have such a recognisable face to front the campaign, and I’m sure Sir Alex Ferguson’s story will help to encourage people to get themselves checked early.

“This advert is part of our £30 million Detect Cancer Early plan, which is initially focusing on breast, bowel and lung cancer, and aims to increase the early detection of cancer by 25 per cent by the end of 2015.”

Sir Alex Ferguson is backing the campaign as he lost both parents, who were in their sixties, to the disease. His father Alexander died in 1979, while his mother Elizabeth passed away in 1986.

He said: “I wanted to be involved in this campaign as I lost both my parents to lung cancer. I know the devastating impact cancer can have on families.

“But cancer’s not what it used to be and there are now treatments that can save or extend your life. So rather than doing nothing about it, I urge anyone who is worried to get checked as early as they can.”