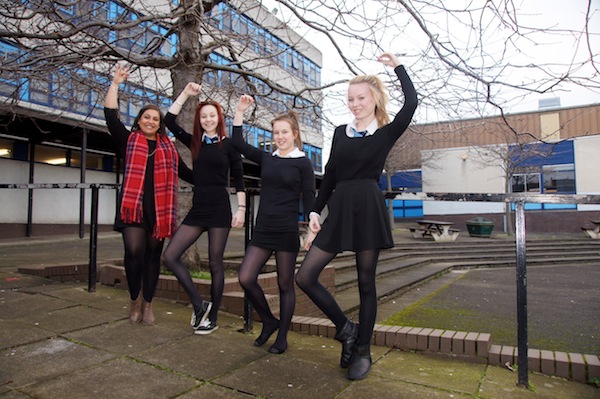 Commonwealth Class is a collaboration between the BBC, the British Council and the Commonwealth Secretariat.

The assembly will focus on the schools award winning links with South Africa. It will include Tswana dancing performed by students who have just returned for the Northern Cape, South Africa. Students were able to learn a number of local dances and will preview them at the assembly and share their experiences of life in Barkly West High School.

Schools worldwide are trying to make the World’s Biggest Assembly happen by starting their school days across the time zones with assemblies. Each school will be celebrating the values and connections of the Commonwealth’s diverse global family.

Headteacher, Ms Sheila Paton said “Three of our 4th year girls recently spent a week in South Africa being taught local dances. Commonwealth day gives us the focus to celebrate our partnership with Barkly West high school in South Africa. The partnership supports our global citizenship work which was recognised earlier in the year by the British Council who awarded the school the International school award”

Commonwealth Class enables schools to take part in online debates, competitions and work on projects with the aim of giving young people a unique and hands-on international learning experience of the Commonwealth family.

4th year student, Katie Ritchie, said “We had an amazing time in South Africa learning various dances and making new friends. Following the assembly, we plan to lead dance workshops and organise a whole school Commonwealth Games celebration in May when we will host 3 students who will travel from South Africa “

Ms Sheila Paton continued: “The whole school is gearing up to celebrate the Commonwealth games and Game On Scotland recently recognised excellent Games-related learning by awarding a plaque to our school. We plan to hold a big celebration in May that will feature the South African dances that were showcased at the assembly today. We are committed to making the most of the learning opportunities on offer around the Games to enrich our students learning and to enable them to be global citizens”