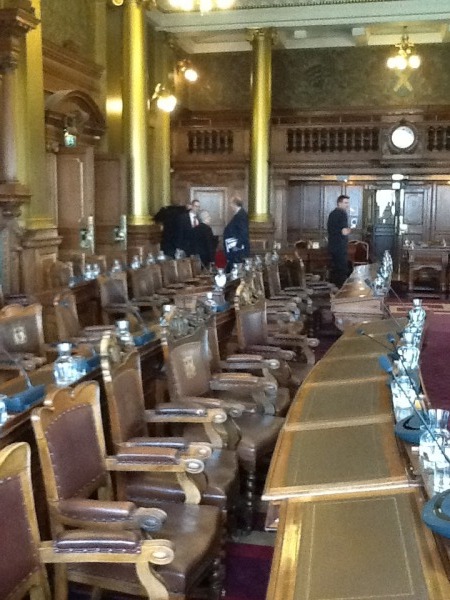 There was a deputation from UNITE Edinburgh making a presentation to the council about the importance of  Living Wage Week at the full meeting of the City of Edinburgh Council on Thursday 23 October and the Digital Sentinel were there to bring you the news from the floor.

“We think that if the Council persuades contractors to pay the Scottish Living Wage many low paid trade union members would benefit as well as many non-union employees. The total number of employees that would benefit in Edinburgh would probably be around about 2000 people . Lets not forget how low the national minimum wage actually is, at £6.50 on a 36 hour week is £12,168 per annum. Low paid citizens in Edinburgh would benefit directly if this council became a living wage authority, many would benefit indirectly as there would be pressure on poverty wage employers in retail, pub, restaurants, cleaning etcetera to improve terms and conditions. We would challenge the employers mindset that sees zero hour contracts, lower guaranteed minimum hour weeks and no contractual sick pay as being acceptable.

Councillor Austin Hart particularly wanted to draw the benefits that a living wage policy has on council employees and employees of those companies contracted by the council. Although it was only an urge to persuade contractors to pay their employees the living wage rather than a demand, the motion attracted an amendment from the Conservative Party worried about the effects that paying a living wage might have on the sustainability of other organisations. This amendment was derided by all the other political groups on the council during the debate.

“In Scotland today over half the children experiencing poverty live in a household where at least one parent works, without decent pay people in work struggle to meet the most basic of human rights to adequate shelter and food for their families and themselves. It is no longer the case that employment guarantees a route out of poverty, so employers need to be encouraged to take this important anti-poverty action and I feel it is incumbent on the public sector to lead the way on this. We believe, in the coalition, that including the Living Wage provision in public sector contracts is a  a crucial element in ensuring that increased numbers of workers in the private sector are protected by a living wage, this is the most effective tool that we have at our disposal.

The amendment was rejected with only 10 votes in favour from the Conservative Group who tabled it. The council passed the motion with 45 votes in favour.

The Living Wage is set at £7.65 per hour, although a new figure will be announced during the first week of November. You can find out more about the Living Wage Week here.

How many of you are paid at that level? If you are earning less than that we would love to hear from you.