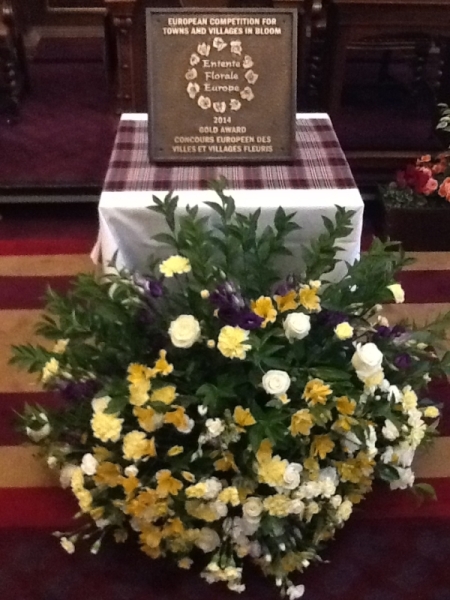 The full meeting of the City of Edinburgh Council on Thursday 23 October marked the tenth anniversary of Edinburgh becoming the first UNESCO City of Literature and also the city receiving a gold award in the Towns and Villages in Bloom competition.

Through the Traffic of Tongues

Ten years we’ve had of trafficking,
of keeping borders open through words,
through discerning conversation,

the hospitality of books. Seven citadels
of literature, all fostered from a dream;
seven hills and heavens, cities of possibilities.

Edinburgh: first to light up with literature,
spelled out its heritage and future. That night
in Paris was a consummation, a delight.

We passed the flame to Melbourne:
an ancient meeting place of sign and symbol,
built on gold, a rush of writing, a wealth.

Then Iowa City made the cut; told the world
it had made the sentence behave
and misbehave, recast our myths.

Dublin followed with its Book of Kells,
its four Nobel literary laureates
and a daft Bloomsday every June.

Reykjavik was standing in the wings,
holding its ancient tongue; weighing
its Edda and Saga, its poetic forms.

But Julian of Norwich was stirring in her grave.
Across 600 years we still need the solace of words
that tell us that all shall indeed be well.

Kraków is the seventh hill, the seventh dream:
its word hordes, bulging libraries, its bookshops;
the deep lines on its literary face.

All outward-looking places, all generous,
all built on the topography of words.
Open the book, read, translate, pass on the gift.

More information on the poem and the presentation can be found here.

There was also a photocall to celebrate the Council’s Gold Award in the European Competition for Towns and Villages in Bloom called the Entente Florale. Edinburgh won gold for excellence in landscape and horticulture, environment and tourism and involvement.

The Grassmarket Community Project also won the special Lucija Cikes Prize for integration of disabled people in to society through green skills. More information about the competition and the groups involved can be found on the Council website.