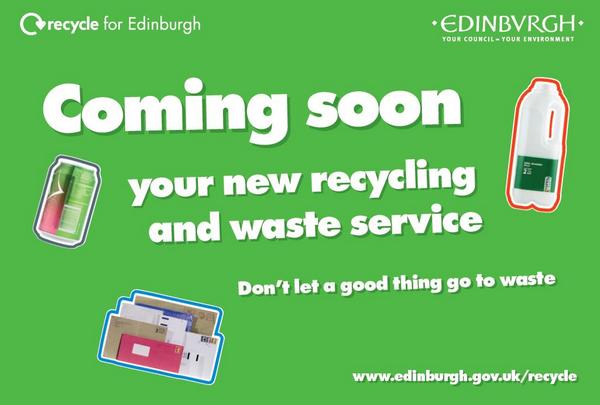 A redesigned recycling service in Edinburgh is already reducing the volume of rubbish being sent to landfill, council figures show.

A 30% reduction in landfill waste has been brought about by the new kerbside service, with homes binning an average of 5kg a week compared to 7kg before the change.

Recycling has also increased in areas where the new service is in place, and has risen from approximately 2kg to 3kg per week, which is a 50% increase.

Now 17,000 more homes are set to receive the service, which will be rolled out in phases to 140,000 properties in total over the next year.

“These figures are extremely heartening and demonstrate the impact the new service is bound to have on recycling in the city.

“There is no doubt we need to reduce the amount of waste being sent to landfill, and I am confident that the public will help us to achieve this, as the first phase of the roll-out has shown.

“As we introduce the service to more and more households, we will continue to learn from the process, making every effort to help people adjust to the changes.”

New grey bins will begin being delivered to phase two homes, which includes Wester Hailes, this week. On householders’ start date, their existing green wheelie bin will be emptied of general waste for the last time before being used for recycling. Blue boxes will still to be used for glass as well as small electrical items and food and garden recycling will continue as normal.

It is hoped increasing space and capacity for mixed recycling will support the Council’s pledge to recycle 70% of the city’s waste by 2025.

Juliet Shields, who lives in Craigentinny with her husband Colin and five-year-old son Conor, began using the new recycling service in September, and says it has changed her attitude to recycling. She said:

“Before the new service I didn’t recycle very much, so when I saw it was happening I thought ‘I’m going to have to get on top of this’. I’ve found the new service great – there’s so much more stuff we can get rid of, it just seems much better to me now.

“I’ve become a lot more aware of the importance of recycling having a son too, and I want to set him a good example. I think people are very enthusiastic about the new bins and system and for me it works really well.”

Joyce Grieve, who lives in Restalrig with her husband Derek and seven-week-old son Christopher, also began using the new service in September. She said:

“I love recycling, so I was doing it already – I don’t like to throw things away that we don’t need to. But I really like the new service, I love the fact we’ve got a bigger recycling bin now. Having a little one we’ve had a lot of boxes and presents and it’s great to be able to put it in a place where we can recycle them.”

As well as providing environmental benefits, increasing recycling rates can save the Council millions of pounds of taxpayers’ money spent on landfill costs.

This approach follows a number of other councils, including Falkirk and Fife, who have made the move to increase recycling capacity for residents.

Visit the recycling pages on the Council website for more information.