There has been a huge increase in the number of residents that have had their say in how Edinburgh Council should spend its budget.

The increase is detailed in a report, which will be considered by the Finance and Resources Committee on Tuesday, 3 February. The Council received comments on topics such as allotments, early years and adult education, Edinburgh Leisure, library opening hours, public toilets, homelessness and third party grants.

For the first time the Council used a new online tool enabling residents to have their say on how the Capital invests and saves over the next three years. The report includes feedback from around 3,525 Edinburgh residents, key stakeholders and local businesses including 1,719 people who used the online planner. The Council also received 782 telephone calls, emails and letters, 145 budget leaflets were returned and 524 comments were made through social media.

A budget question time event was also attended by over 40 people, viewed by 200 people on the live webcast and watched another 862 times using the archive. 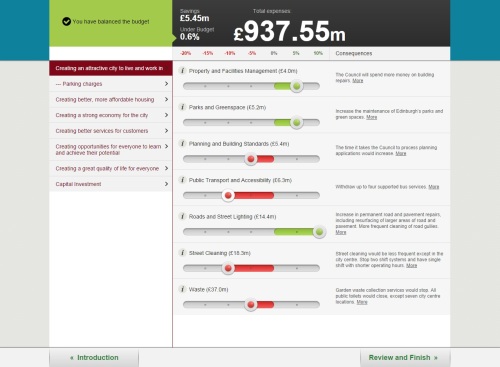 In order to meaningfully engage with a larger and more diverse group, the online planner allowed the Council to show where it expects to incur costs in 2017/18, to demonstrate the impacts of increasing or decreasing spending in all of its services, and to give respondents the opportunity to express what they feel the Council’s priorities should be. Impacts shown in the planner were indicative of what might happen as a result of budget changes. The Council also asked for public views on this year’s 2015/16 budget proposals.

“I would like to thank the thousands of residents and businesses who took part in this open and democratic 11-week engagement and consultation process. A broad range of channels were used to ensure that everyone had the opportunity to have their say as an individual and or as a group to influence how the Council should invest and save money.

“The Council received five times more feedback through this year’s budget engagement and consultation than last year. The online planner was extremely successful and we ensured it was promoted to all age groups and people from all walks of life to help us understand more fully where Edinburgh residents think Council money should be invested and saved. We will be taking this success and working with people right through the year to develop a more participatory process throughout the city.

“The comments and the results of the budget planner are now being carefully considered along with all the other feedback we received. This will help us to make the right decisions for our residents now and in the future when setting our budget. I would encourage people to watch councillors making these important decisions for the city live, via our website, or catch up afterwards on the webcast archive.”