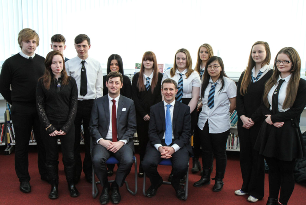 Edinburgh pupils who trained through a groundbreaking project to tackle violence and bullying shared their work with the Cabinet Secretary for Justice yesterday, Wednesday 4 March 2015.

Edinburgh’s Community Safety Convener, Councillor Cammy Day, also spoke at the school this morning about how MVP is an important part of anti-crime campaign #StrongerNorth.

MVP Scotland trains senior pupils to become mentors who, in turn, equip younger students in ways in which to intervene and prevent incidents that could lead to gender violence, which can be domestic abuse, sexting, assault or homophobia. Pupils are taught to challenge their own friends and peers about their behaviour if and when it’s appropriate.

It was first piloted in Portobello High by the Violence Reduction Unit in 2011 and has since been rolled out to 11 secondary schools in the Capital. The unit’s Chief Inspector Graham Goulden spoke to pupils during this morning’s visit about its work.

MVP is a key feature of the #StrongerNorth initiative as it really engages young people by helping them to recognise unacceptable behaviour, and gives them the power to face up to it. These skills are helping them to change attitudes whether it’s in school, in their homes or when they’re with their friends.

Most school children have a great attitude and are involved in many positive schemes, but we know that the bad attitude of even just a few can have a real impact on communities.

#StrongerNorth and projects like MVP and Total Craigroyston are aimed at nipping unacceptable behaviour in the bud before it escalates into something worse, and it was fantastic to hear first hand today about how these schemes are really working.

I was delighted to be invited along to Craigroyston Community High School to see the excellent work ongoing to tackle the issues of violence and bullying in schools.

Since 2008, incidents of violence among young people have halved across Scotland, but it is crucial we are not complacent and education is key to ensuring our young people change the culture of violence in our society.

The work being done through the Mentors in Violence programme by the Violence Reduction Unit to train these young people to deliver their own training is having a huge impact not only within the school but also throughout the wider community. The programme empowers young people by bringing issues such as bullying and violence out into the open to allow for full, frank and informed discussions around the risks and consequences.

Most importantly, it’s giving our young people a confidence and sense of responsibility that will benefit them throughout their lives.

The MVP programme is emerging as a great way to continue to safely discuss many issues that contribute towards abuse and violence in Scotland. It provides schools with an approach that supports learning, as young people are faced with a range of external influences that impact on their resilience, such as online media. Bullying is still an issue in our schools and also strips young people of control.

At the heart of violence and abuse is a breakdown in relationships. Let’s use relationships in the form of friendships to counter all of these issues allowing young people to do their best at an important time in their academic lives.