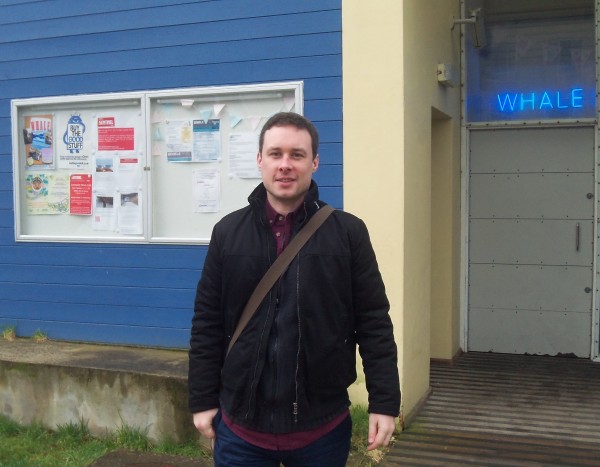 We recently interviewed Richard Doherty the Green Party candidate in the General Election for Edinburgh South West, about his background, what led him into politics, why he decided to stand in the election and what Green policies he thinks will have a big impact on Wester Hailes.

If you enjoyed this interview make sure you have a look at our interviews with the other candidates – there are two others on the site already and more to follow.

Can you tell me a little bit about your background?

Currently I’m working for Alison Johnstone the Green MSP for Lothian which I’ve been doing since halfway through 2013. I came back up after being down in England for a couple of years doing sub editing for the Press Association and I was doing a bit of green journalistic stuff at the same time. Which is why when I moved back up I was able to have a bit of involvement already in some of the stuff that was going on so I was able to get into the campaigns and stuff in Parliament a bit more easily.

How long have you been involved with the Green Party?

I joined just as I was finishing university. I think the reason I joined was purely because, my postgrad was in journalism and when I was doing that, there was a story that I was researching. I approached loads of people for comment and the only one that really got back to me was a guy called Danny Alderslowe who was a Green Councillor at the time in Glasgow. He was so helpful he gave me everything I needed for a good story, whereas nobody else was particularly helpful. It didn’t just emphasise the fact that unlike the other political parties the Greens had a kinda position where they could take a principled stand on things and actually say things without having people telling them they cant do it or they’ll lose donations or lose influence and all that stuff that holds the other parties back.

What was it that made you want to stand as an MP?

We did our selection process last summer, at that time, you know, it was the Summer of love for Scotland. It was the one time, certainly in my life, that we’ve had a potential future which really worked for the people.

That kind of spilled over into working in the office and working with Alison and Patrick and seeing what they do every day. The fact that I’ve got a job now where I’m actually quite proud of what I help to do during the day because Alison and Patrick stand up and talk about social justice and ending poverty. It’s a fantastic opportunity so when nominations came out it was just a kinda over enthusiastic lets all help and try to build this better future for Scotland.

Is there any issues or policies that the Green party is involved in that you think will have a big impact on Wester Hailes?

The main thing at the moment is, obviously poverty and inequality are the two biggest issues for us generally, Alison was talking the other day about how if there is one thing she could do it would be to enshrine it so that it’s a human right to food, that’s the kind of thing I would absolutely love to do at Westminster as well. The biggest issue at the minute and I can’t believe it’s so under, not under reported on but it’s just underappreciated the severity of it is TTIP, the Transatlantic Trade and Investment Partnership, which is the EU and the US negotiating a trade deal, in secret, which will give international corporations, mostly American. It will give these corporations the right to sue any government for any legislation that impacts their profits. At the moment you have Phillip Morris the tobacco company suing the Australian Government because they introduced plain cigarette packaging. Plain cigarette packaging, all the evidence is there to show that it benefits the public health but you have a government that cannot implement public health initiatives because a corporation somewhere else will sue them for it. New Zealand are not pursuing plain packaging until they see the outcome of that legal case.

It is not just that this is a direct attack on democracy where it happens but it is a direct attack on democracy everywhere. The impact for places like Wester Hailes is massive because essentially what it is going to mean is you cannot put up wages you cannot improve employment rights, you cannot do anything, you cannot address the problem of short term low pay and insecure work that we currently have here because anything you do to improve any of that will obviously impact profits. If you are in Wester Hailes just now and you are looking at what opportunities there are going to be in the future then we sign this trade deal, it’s kind of hard to see  because you can’t even then have power to elect the politicians to make decisions for you because they are all in the pocket of the corporations. There’s lots of things, local community empowerment is massive for us and one of the things we are working on is trying to amend the Community Empowerment Bill which is currently going through the Scottish Parliament. We are trying to amend that to get community right to buy football clubs, you know an asset to the community should be owned by the community. Anything that widens access, particularly for poorer and non-white male backgrounds to get ahead, anything I can help to do with that as an MP would absolutely be on my top priorities.

After the referendum there was a big increase in the membership of the Green Party. Do you think that will have any impact?

What king of impact it will have is really difficult to tell. We weren’t much over one and half thousand members in September and we are now round about nine thousand. You get people that say these are all just nationalists, but in that case why didn’t they join the SNP. There was a massive difference between what we were saying during the referendum and what the SNP were saying, particularly on things like currency, obviously in oil. Pretty much anything that came down to where it was a massive Better Together campaign issue was usually stuff that we disagreed with the SNP on as well. It was frustrating for us, the debate was more SNP against unionism which has now spilled over into the SNP against Labour and that’s the tribal division that we have. I think what attracted people to the Greens was that we weren’t part of that everything will be good if you do things my way, everything will be terrible if you do things their way. We were saying, no, no, no, this is an opportunity it is also a set of serious challenges.

One of the biggest things was when Alistair Darling came up to the economy committee at the Scottish Parliament, he was talking about pensions and how if Scotland were independent we would need to urgently rework our pension system because of our proportionally smaller population and proportionally older population, his reasoning was that as part of Britain we wouldn’t need to make that change for a few years later. The Scottish Greens position was why is it a good idea to ever differ doing something you know you are going to have to do for a sustainable future. Built it now. I don’t think that the people who have joined the Greens are just blindly signed up to this everything’s got to be about Scottish nationalism nonsense. I think that the seven or eight thousand people who have joined the Greens so far are looking for a different type of politics. Something more  cooperative, something more about discussion and debate.

Speaking after the interview about other important Green Party policies Mr Doherty added:

Our priority has to be on providing jobs in the new industries for those currently in the oil and gas sector, and every MP will have a responsibility to secure new jobs for those in their constituency also. Currently we import renewable technology from the likes of Denmark, where publicly-owned companies profit from supplying the technology that we in Scotland have an opportunity to lead the world in developing ourselves – and exporting globally.

There are huge opportunities to make a just transition to a sustainable economy, and communities like Wester Hailes in particular would stand to benefit hugely. This transition, as well as having the potential for a re-industrialisation of Scotland, will, if Greens are in power, also give communities the chance to generate their own energy, lifting them out of fuel poverty and affording them the means to invest directly in measures to improve their local area.