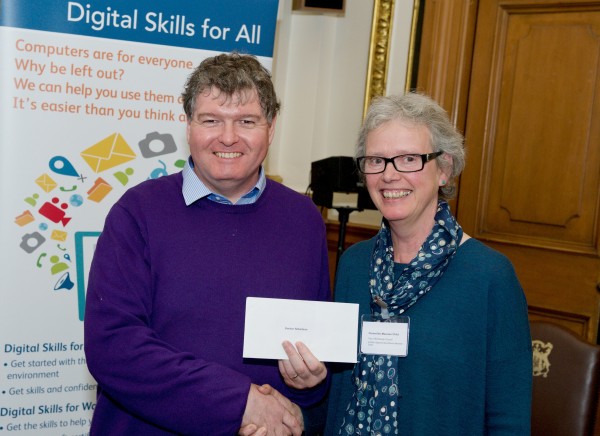 The Digital Skills Academy is celebrating assisting 1000 people on low incomes in Edinburgh to get online through its Use IT programme since the end of 2012.

The programme, funded by the City of Edinburgh Council and the Department of Work and Pensions, aims to give everyone equal access to the benefits of the internet regardless of their income level.

Gordon Robertson, the 1000th learner and pictured above said:

James (the trainer) was just perfect – gave me one to one help and didn’t leave me to struggle on my own. This gave me a lot of confidence that I would be supported.

Gordon was a carer for his mum for over 5 years and was then unemployed for over a year. Before he attended USE IT he had never touched a computer and he was too scared to touch them. In addition, having dyslexia made him even more nervous. Gordon said he has enjoyed the class and has continued to drop in for any extra support. He is more confident when using the computer and commented that now if he comes into the class and the tutor is busy with another client, he is able to go on the computer by himself to do what he needs to do. Before attending the class he would never have been able to do this. Having the learning materials printed out on different coloured paper and using the dyslexia gels helped Gordon a lot with his learning. Gordon was asked if he would be confident enough to go to the library to use the computers on his own and he said he would.  Gordon has currently been looking to see if he is able to purchase a PC or laptop so that he can do some more work in the house, but finds the cost an issue.

We care passionately that everyone, regardless of income, should be able to access the internet. Giving people the confidence they need to help them get online and benefit from the advantages that this brings, is the most important part of our work.

It is estimated that up to 50 per cent of people living on low incomes are not online and in Edinburgh that equates to nearly 20,000 households concentrated in areas of deprivation. Participation in the digital world has become increasingly important in allowing people to engage fully with many aspects of public, economic and social life. As a result, those that do not have access to the internet, for whatever reason, are at an increasing risk of being excluded from the benefits associated with digital participation in areas such as education, employment, accessing public services and buying products online.