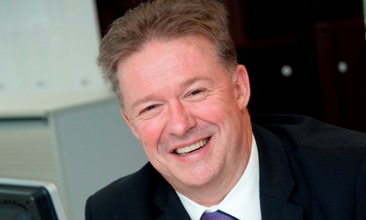 Councillors unanimously approved a report recommending his appointment during May’s council meeting, following which he has made a number of trips to the Capital to familiarise himself with the role.

This is a tremendous opportunity to lead one of the most high profile local authorities in the UK.

There are undoubtedly major challenges ahead with increasing demands for council services and reducing budgets but I will do my utmost to ensure that the Council continues to work hard for the city and everyone who lives, works, visits and invests here.

A great deal has been achieved in Edinburgh in recent years, and still much more to aim for, and I am looking forward to working closely with elected members, officers and our partners to ensure that we build on those successes.

Of course, on a personal level, it is also great to return home, particularly when I still have family, including my parents, based here in Scotland.

One of Andrew’s achievements in his previous role came earlier this month, successfully negotiating a Devolution Deal for Cornwall – the first rural authority in England to be offered one.

Edinburgh is currently working with its five neighbouring local authorities to pursue a similar deal for the Edinburgh and South East Scotland City Region.

It was clear from the recruitment process that Andrew had the qualities required to take on the role and I look forward to working closely with him to ensure the continuing prosperity of our city.

He brings significant experience of leading and delivering change in the public sector and has achieved recent success in securing a Devolution Deal for Cornwall – all of which is very encouraging as he moves into his new role. I’m sure he’ll hit the ground running.

Andrew Kerr began his career with the District Council in Falkirk, the town of his birth. His 32-year public sector career has since included over three years at Birmingham City Council, where he led the national award-winning Birmingham BEST organisational development programme. From 2005 he led the turnaround of North Tyneside Council as its new CEO.

He was appointed Chief Operating Officer of Cardiff Council in March 2012 where he delivered a £900m joint venture in waste management. He has led transformation programmes in his last three authorities delivering more than £100m worth of savings.  In his most recent post with Cornwall Council he led a programme planned to deliver £196m savings in the next four years.

Andrew has also represented Great Britain in international athletics (400m). He is married with three children.