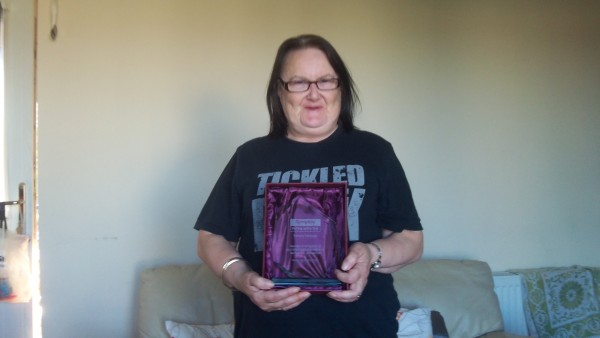 Eunice Main, local resident and community activist has been presented with an award from Remploy.

Eunice, a well known face around the area is involved with the West Edinburgh Timebank, the Willow Gardening Group and the Wester Hailes Community Council. She was presented with the award in the Remploy office on Earl Grey Street by Kenny Macaskill, the former cabinet secretary for Justice and MSP for Edinburgh Eastern, for recognition for her determination to overcome barriers and her commitment to securing employment.

Eunice first became involved with Remploy through the Job Centre and has since appeared on STV Edinburgh discussing the group.

Eunice speaking of the award:

I’m fair away with it. It was like being a wee actress! Remploy is a great place to be they are very helpful.

I keep the award beside the telly so I can always see it. 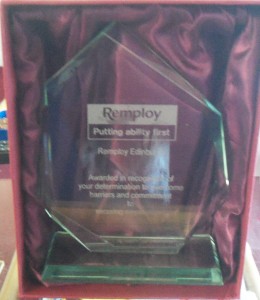 Remploy aims to create equality in employment, facilitating access to sustainable employment and careers and enabling people to achieve their ambitions and maximise their potential.

You can read and see photos of some of Eunice’s favorite places in Wester Hailes here.