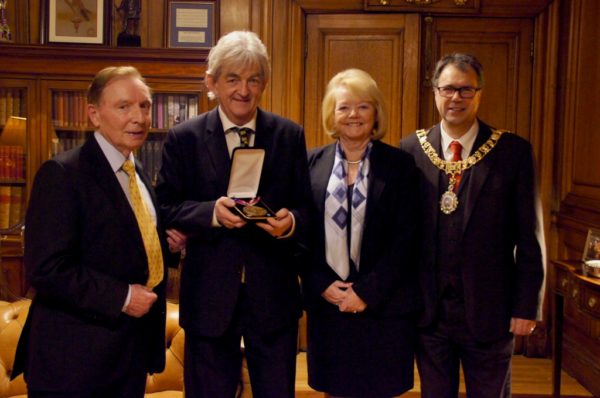 An Edinburgh-based advocate for the homeless has been recognised by the city’s Lord Provost after earning an award from the United States Sports Academy.

Mel Young, founder of the Homeless World Cup, the Scottish Big Issue and former editor of the Wester Hailes Sentinel, follows in the footsteps of Cristiano Ronaldo, Tiger Woods, Andre Agassi and Michael Jordan to be named winner of the Academy’s prestigious 2016 Jackie Robinson Humanitarian Award.

The international recognition is presented to an individual ‘who has demonstrated a concern for mankind’. Mel’s leadership of the Homeless World Cup has helped change the lives of over one million people across the globe and the tournament continues to help over 100,000 homeless people every year.

Marking Edinburgh’s pride in the Award and all that he has achieved, the Lord Provost invited Mel to be recognised with a reception at the City Chambers where the Jackie Robinson medal and certificate was showcased.

I’m honoured to receive this award and humbled by the recognition. It’s not really for me but for everyone, all of the volunteers involved in the Homeless World Cup.

One of the key reasons the tournament works is because of the common language of football that everyone understands. It was fabulous to have two people in this room, Ann Budge and Sir Tom Farmer who at different times have saved our city’s football clubs. These clubs mean so much for Edinburgh and to the people who watch the games. That is the power of football!

I spoke recently at the City Vision 2050 launch and I hope that many people get involved in that because this is a great city here in Edinburgh. It is great to be part of the conversation. One of the first issues raised during that launch was that people do not want any more poverty in the city. That is fabulous and something to start with.

Mel’s tireless efforts have had a truly global impact. It is incredible to think that the passion of one man in Edinburgh has led to over one million people across the globe receiving help through the Homeless World Cup.

Mel’s passion and modesty is admirable and I was delighted to pass on the city’s immense pride in all that he has achieved. There aren’t many people you can look in the eye and think, this person has really changed the world. Mel is one such rare individual.