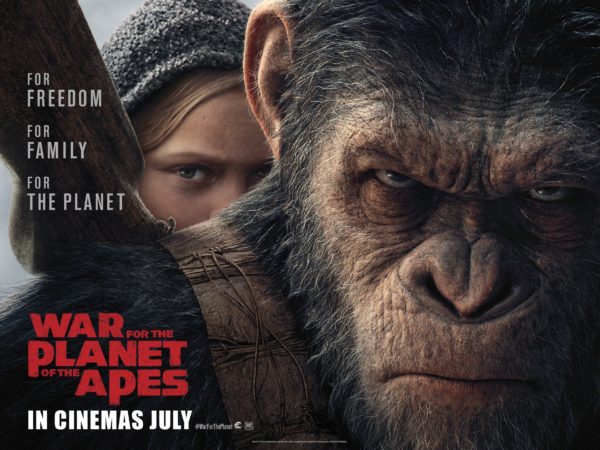 Here is a review of the new film War for the Planet of the Apes submitted by one of our community reporters. To read more of our reviews by local people click here.

‘WAR FOR THE PLANET OF THE APES’
Now at ODEON/Plaza
Starring Andy Serkis & Woody Harrelson.

This is the ninth (!) movie in the P.O.A. saga – only James Bond has outpaced the Ape clan in their tireless pilgrimage to the Promised Land.

The first ‘Planet of the Apes’ appeared in 1969 starring Charlton Heston as an astronaut who crashlands on an idyllic planet ruled by a civilization of apes with human intelligence. He is captured by them and kept in a cage for their entertainment – like the Panda in Corstorphine Zoo. He escapes and becomes involved with a group of disaffected apes who rebel against the regime in power. This movie was a huge hit at the time and sequels followed through the 70’s, all with ‘Planet of the Apes’ in the title – so it became one of the first  ‘Franchise’ movie series – each a gilt-edged earner for investors.

Eventually the Apes ran out of steam and there was a long intermission until a few years ago it was decided to revisit our simian relatives – because, like Frankenstein and Dracula, this is a cinema myth that does not want to die.  The myth was given a new lease of life by placing it in a different context – a near-future San Francisco decimated by a virus called Simian Flu – caused by a reckless lab experiment. During these drug trials Lab primates are accidentally given powers of human-like intelligence. ‘War for the Planet of the Apes’ is the third film in this new trilogy. If you missed the first two – ‘Dawn’ and ‘Rise’ – they are available on budget DVD and are recommended. However the opening credits of ‘War’ give a story catch-up.

This movie is worth seeing for its Computerised Animation (CGI) alone – the Apes in the 70’s had stiff rubber faces, while today’s new technology enables their eerily lifelike features to express emotions ranging from despair to anger. Andy Serkis (‘Bronson’ & ‘Ian Dury’) gives a sterling act as Ceasar, the Apes inspiring chieftain. This character reminded me of Spartacus, for Ceasar is a charismatic leader – also an escaped slave like Spartacus, who leads his clan of abused former zoo inmates and laboratory experiment victims on a exodus to escape permanently from the human race.  Ceasar is also willing to sacrifice his life for his tribe. However they are pursued by a rag-tag militia led by the ‘Colonel’ (Woody Harrelson) who see the Apes as a mortal threat to humans. The ensuing conflict is dark, violent and desperate – I felt involved in the Apes struggle to survive because they express dignity, morality and wisdom which their now-brutalized human oppressors have lost. The Apes seem to have inherited human values. The ‘Colonel’ is not very convincing. Woody Harrelson is One Bad Dude but his script is so poor as to be comical. Woody tries to impersonate Marlon Brando’s unhinged Captain Kurtz in ‘Apocalypse Now’ – shaved skull included, but it doesn’t work – this is the fault of the screenwriter.

Also the movie lacks humour – there is only one feeble joke (about binoculars which I won’t spoil for you). In contrast ‘Wonderwoman’ had humour and did not take itself too seriously which I think is a flaw in ‘War for the Planet of the Apes’.  Finally I will say that the music score is leaden and humdrum, unlike for example the new ‘Dunkirk’ movie where the dramatic pulsing music is a key part of the experience  – In spite of this I am hooked and look forward to ‘P.O.A.No.10’ in the near future!