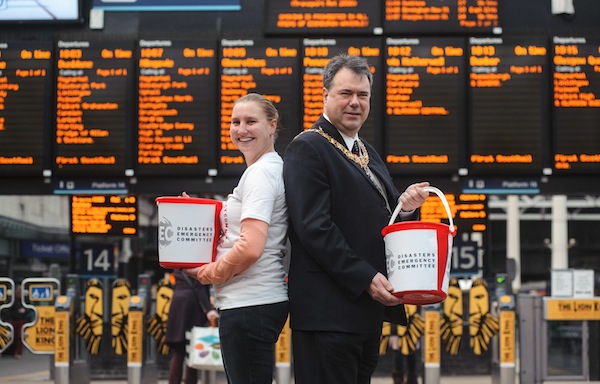 Edinburgh’s Lord Provost, Donald Wilson, was at Waverley Station today, helping collect money for over 13 million people affected by typhoon Haiyan that devastated parts of the Philippines earlier this month.

Drumming up support for the Disasters Emergency Committee (DEC) at a bucket collection alongside volunteers in packed Waverley Station, the Lord Provost praised all those in Edinburgh who have already been part of the generous response in two weeks since the appeal was launched.

The Lord Provost said:- “I was only too happy to lend a hand this morning. The response from travellers was extremely generous – as I’m told it has been across the city.

“The council is already been playing its part via the Edinburgh Disasters Response Committee and we will continue to do all we can to help those affected by this terrible tragedy.”

“We have had a strong response from people in Edinburgh and we’re very grateful to the Lord Provost for supporting us here today, as well as everyone who has made a donation so far. With the money raised, emergency teams are working in the areas affected to provide essentials such as food, safe water and temporary shelter.

“We are already seeing an impact on the ground, but the destruction has been wide-spread and the need for help is huge. In order to continue delivering essential emergency aid where it is needed – reaching as many people as possible – I would urge people in Edinburgh and beyond to give what they can. Every donation will make a difference.”

Generous Scots have so far donated £4,700,170 to the DEC, which brings together 14 leading UK aid agencies in times of crisis. This sum includes a pledge of £600,000 from the Scottish Government.

The funds will go directly to help hundreds of thousands of people have had their homes damaged or destroyed and are in desperate need of food, water and shelter.

To make a donation to the DEC Philippines Typhoon Appeal visit http://www.dec.org.uk, call the 24 hour hotline on 0370 60 60 900, donate over the counter at any high street bank or post office, or send a cheque.

What your money will buy

Stay up to date with developments in the Philippines, the emergency response and the DEC’s fundraising efforts on twitter: http://twitter.com/decappeal  or on Facebook  via http://www.facebook.com/DisastersEmergencyCommittee 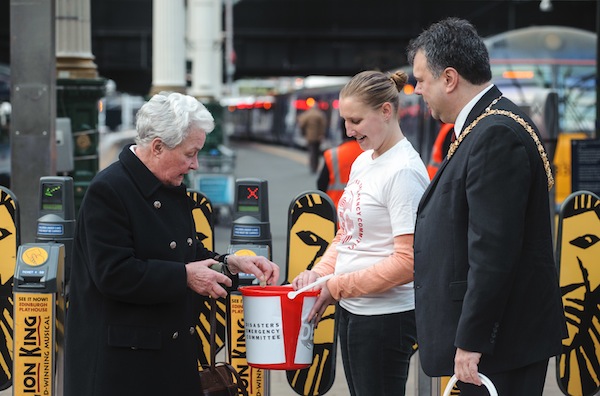