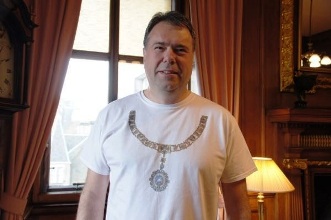 The Lord Provost is preparing to tackle 26 miles on Sunday, 26 April 2015, when he runs the Virgin Money London Marathon 2015.

He will join over 960,000 runners, including Scottish TV presenter Jenny Falconer, F1 racer Jensen Button, and supermodel Christy Turlington in the annual race to the finish line in The Mall in London.

In training for the race with his trademark ‘chain’ of office running gear (pictured), the Lord Provost Donald Wilson has been busy raising money for local Edinburgh charities. Including gift aid he has received over £5,000 in donations so far.

With the starting line looming I’ve been going the extra mile to prepare myself for the London Marathon. It’s my first ever attempt at a 26 mile challenge after taking up running last year, but a successful ‘test race’ earlier this week gave me a confidence boost. The real thing is a daunting prospect but it is all in the name of charity.

The donations that have rolled in and the supportive comments I’ve received have been heart-warming and I thank everyone for their support. Wish me luck!

The Lord Provost will be running in order to raise funds for two local Edinburgh charities which are close to his heart: The One City Trust and the Jamie Skinner Foundation.

The One City Trust Rapid Action Fund is the Lord Provost’s charity and aims to fight inequality in Edinburgh. It has provided emergency funds to organisations such as community foodbanks and breakfast clubs, and social clubs for lonely elderly residents.

The Jamie Skinner Foundation is a charity set up by relatives of Jamie, who tragically passed away from heart problems while playing football at Edinburgh’s Saughton Sports Complex aged 13. Money raised by the Lord Provost will go towards the purchase of defibrillators for Edinburgh communities and training in their use.

The Lord Provost’s donation page will remain live until after the race at www.virginmoneygiving.com/lordprovost