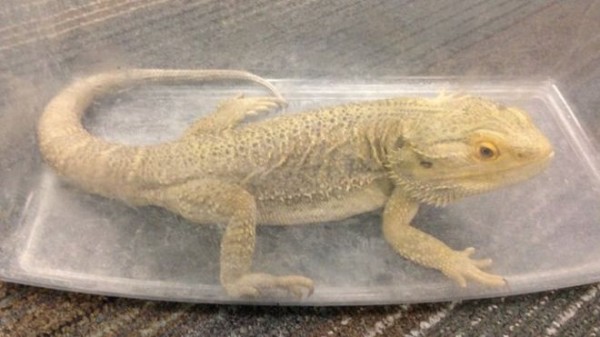 The Scottish SPCA is asking for information after a bearded dragon was found on a number 20 Lothian bus.

The reptile, called Blakey after the charactor on On the Buses, was discovered on Thursday 7 May 2015 and is now being cared for by the SCPA’s Edinburgh and Lothians Animal Rescue and Rehoming Centre.

A passenger found Blakey inside a plastic pet carrier within a large carrier bag and alerted the driver.

At this stage we can’t say for sure whether Blakey has been abandoned. Someone could have been transporting him and forgotten him but this seems unlikely and as far as we are aware no-one has been in touch with Lothian Buses looking for him.

We understand Lothian Buses will be reviewing CCTV footage. In the meantime we would ask anyone who recognises Blakey and knows who might have owned him to contact us.

This isn’t the first animal we have rescued having been left on a Lothian Bus. Last year we took in a kitten who we named Ticket and in 2013 a guinea pig was left behind.

Blakey is in good condition and is now receiving the care he needs with us. If he has been abandoned we will soon be looking to find him a loving new home.