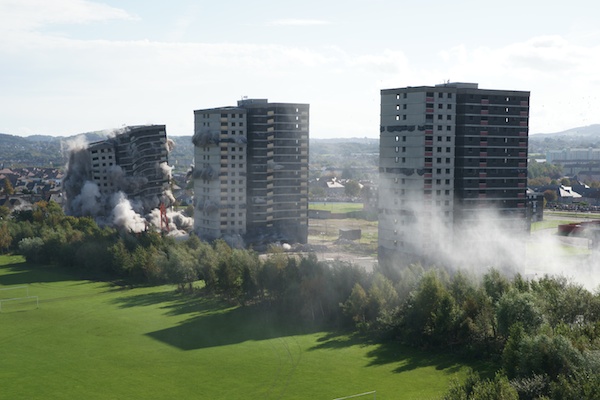 A Rude Awakening
– by Sara-Jane McGeachy

I’ve lived in Calder Gardens for nearly 10 years now and I’ve woken up to some interesting noises in that time. Amongst the most memorable were the sounds of my neighbour’s new bagpipe hobby, a seagull relieving itself on my window with such ferocity I thought my flat was being attacked, and the demolition of the Sighthill flats. Most mornings I hear the cheerful, if sometimes boisterous sound of kids arriving at the primary school next door.

This morning I woke to a lot of machinery and diesel engines. Coming out of sleep, it took me a while to identify the noise. It couldn’t just be a truck driving past, the sound was not going away. These machines were too close to be on Calder Road, they were right outside my window. Perhaps it was one of the councils little ride-on lawnmowers giving the grass a much needed trim? However, there seemed to be several of them stopping and starting which made the lawnmower theory unlikely.
It sounded for all the world like a scaled down version of those big diggers you see on building sites. Yes, that’s what it was – a digger!

So, the next question was “why”? I dismissed the idea that a great archaeological find had been unearthed. I don’t remember ever reading about significant dinosaur remains turning up in Wester Hailes. Although some of the pathways around here do look prehistoric.

The only explanation was something bad had happened, something very bad. Perhaps a large quantity of drugs had been buried outside and the authorities had to uncover it before it poisons the water system. Imagine the whole of EH11 in a narcotic induced coma after having a cup of tea. That did seem unlikely though. May be it was terror related; what if there was a full scale bomb disposal operation happening outside? No. Surely I would have been evacuated by now.

Not drugs and not terrorism. There was only one option left and it was not a nice one. They’d discovered a body. If I looked out my window I’d see men in hooded overalls, like giant jelly babies. There would be a tent erected and sinister shapes would be removed one at a time, covered respectfully with a sheet. This was horrible. How could I not have noticed anything? It happened on my doorstep. I needed to look.

I couldn’t lay in bed all day, at some point I’d have to draw the curtains and face the scene, whatever it was. The machinery trundled off. They were gone – probably on a break – they’d return later to carry on their gruesome work.

I got out of bed, walked to the window pulled back the curtains. On the communal patch of grass at the back of my flat there are now five newly planted apple trees and three little pine bushes. They look so pretty I start to smile, there are already birds settling on the branches. Whilst I lay in bed imagining the nightmare outside the council have brought a little bit of springtime to me. Over the next few months I’ll be able to look out of my window at the the buds opening into big fluffy blossoms. Won’t that be a lovely way to wake up?